The women, who held placards and green leaves chatting solemn songs to mourn the deceased, called for justice for the 12 victims. 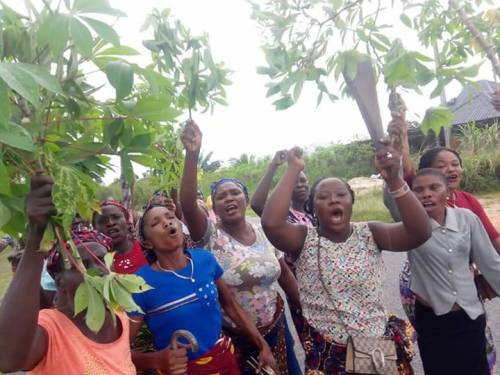 Many angry woman of Oleh community, Isoko South Local Government Area of Delta State, on Tuesday, have taken over the streets to protest.

The women disrupted social and commercial activities in the area while protesting the gruesome murder of twelve inhabitants by yet-to-be-identified gunmen, according to SaharaReporters.

The victims were gruesomely murdered on October 12, 2020, on farmland in Oleh by gunmen suspected to be from the Ozoro community in the same local government area.

The women numbering over 5,000 barricaded the ever-busy Oleh roundabout, thereby causing serious gridlock on the Ughelli-Kwale-Asaba road, as commuters and motorists spent several hours on the road.

The women, who held placards and green leaves chatting solemn songs to mourn the deceased, called for justice for the 12 victims.

The Oleh people, through their president-general, Believe Alakri, had called for a thorough investigation while maintaining that some leaders of Ozoro community, especially the monarch, Anthony Ogbogbo; former president-general, Raphael Afemarei; and the current president-general; Nicholas Areh, have so many questions to answer on the gruesome murder.

On their part, the people of Ozoro community, through its president general, Nicholas Areh, while reacting to the allegation, had noted that Oleh natives were only fanning the embers of war with the way and manner they were currently going about the issue.

They emphasised that the farm in Oleh, where unidentified persons gruesomely murdered the people, was not in dispute.