There was a showdown at Shoprite Ogun state after a young man refused to allow SARS operatives arrest him. 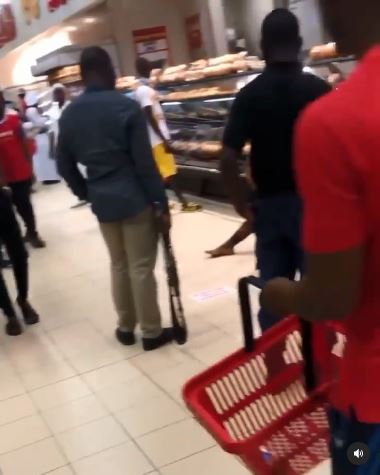 SARS officials attempting to arrest man inside Shoprite, Ogun state
A video has emerged showing the moment a young man queried members of the Special Anti-robbery Squad of the police (government said has been disbanded) as they attempted to arrest him inside Shoprite.
It was gathered that the young man had refused to be arrested claiming that they had no reason to do so as he had not committed any crime.
The officials chased him into into Shoprite, toll gate, Sango Ota, Ogun, where people gathered as the young man refused to be arrested.
He was seen in the video querying the officers. He accused them of operating illegally.
See video below:

If The Government Invest A Fraction Of The Energy Spent On Fighting Successionists On Bandits, Nigeria Would Have Been Saved -Shehu Sani