Mo Abudu has responded after a journalist accused her of stealing a movie demanding millions in compensation. 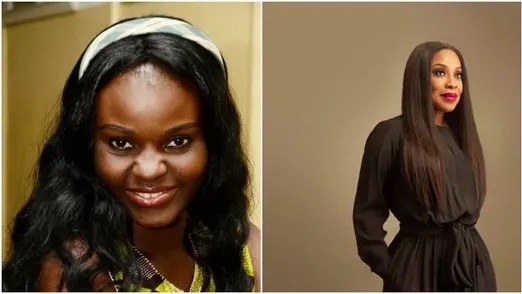 Tobore Ovuorie and MO Abudu
Following damining allegations against her person,  Mo Abudu, C.E.O of Ebony Life has given a response to claims that she stole the movie 'Oloture.
Recall that investigative journalist, Tobore Ovuorie had claimed that Abudu stole the movie 'Oloture' which is a copy and paste story of her life.
Ovuorie is best known for her 2014 investigative work, ‘Inside Nigeria’s Ruthless Human Trafficking Mafia’, has revealed the movie Oloture which was released on October 2, 2020.
According to the journalist, who recently demanded $5,000,000 (about N225million) from entertainment firm, EbonyLife Films for stealing her story, Oloture was a case of the reporter becoming the story.
She also went about how her health diminished due to the trauma that came along working on the story. She further accused ebonylife of adapting her work without express permission.
Mo Abudu has now clarified the allegations in a 10 minutes video released on her Instagram page moments ago.
She captioned the video thus:
“OLOTURE – THE TRUTH
Good morning
I would like to take a few minutes of your time today to shed some light on the recent allegations of copyright infringement made by investigative reporter Tobore Ovuorie against EbonyLife Films in relation to Oloture (the movie)
Please note that this recording is made available to all for information purposes only and we will therefore not be taking comments or answering questions on this video release.
I also stand as mentor to so many young girls and ladies, I never want to disappoint any of you, so again, I did this to give you all an understanding of the situation.
Thank you for taking the time to listen.
Best,
Mo Abudu
CEO EbonyLife Group”