2023 Presidency: There Is Serious Gang-Up Against Tinubu In APC - Party Member Cries Out


An All Progressives Congress stalwart has accused some party members of trying to scheme Tinubu out of the 2023 presidential race. 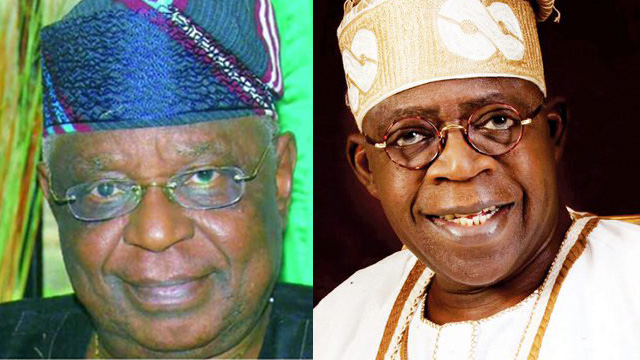 Ajomale and Tinubu
A member of the ruling All Progressives Congress has raised alarm, accusing prominent party members of ganging up against the national leader of the party, Bola Ahmed Tinubu ahead of the 2023 presidential election.
According to Independent Nigeria, Otunba Henry Ajomale, the immediate past state chairman of the Lagos State chapter of the All Progressives Congress (APC), said this on Wednesday.
He spoke a day after Dr. Junaid Mohammed, elder statesman and Second Republic federal lawmaker, said President Muhammadu Buhari and those around him had concluded plans to bar certain politicians from contesting in the 2023 general elections.
The outspoken Northern leader also said certain individuals had hijacked the ruling APC and were working to use the party to advance their personal interests.
Speaking exclusively with Daily Independent, Ajomale, who said attempts were being made to bar Tinubu from contesting for the highest political office of the land, said he hinged his belief on latest developments in the party.
“Of course, there are attempts being made by some people in the APC to stop Asiwaju’s presidential ambition. That is obvious. Because a lot of things are going on in the party which makes one to believe that there is a serious attempt at ensuring that the man doesn’t contest for the presidency of this country,” he said.
When asked why some members of the party were opposed to Tinubu emerging as the party’s presidential candidate, Ajomale said the reason was not known but might be due to the fact that his antagonists are also nursing presidential ambition and they feel threatened by Tinubu’s chances.
He said: “They are seriously ganging up against him but why they are doing that, nobody knows.
“Because every Nigerian has the right to contest for any position in this country inasmuch as he is qualified to do so. “I believe that Asiwaju is one of the leaders in the party and a leader in this country that cannot be denied any opportunity of contesting for any position in this country.
“So, to me, I know that there are so many gang-ups within the party from people who are afraid of Bola Tinubu. Maybe they are doing that because of their own ambition. But there is nobody that should be deprived of the opportunity to contest for any position in this country.”
Also speaking on the controversy trailing the issue of zoning, Ajomale, who was the Lagos State chairman of the defunct Action Congress of Nigeria (ACN), one of the parties that merged to form the APC, said there was an agreement that the presidency would be zoned to the South after the North had completed their terms.
He also warned the party leadership against taking any decision that would contravene the unwritten agreement among leaders of the party in 2015 that power should rotate between the North and the South.
While dismissing the claim that the APC might field another Northerner in 2023, he said the presidency goes to the South immediately President Muhammadu Buhari completes his tenure in 2023.
“I was part of the meeting where that agreement was reached, and it will do our party a lot of good if we can keep to the terms of that agreement as anything contrary may portend doom for the APC.
“The general expectation is that after President Muhammadu Buhari must have completed his tenure in 2023, then power should rotate to the South.
"It is a gentleman’s unwritten agreement, and we should be honourable by keeping to that agreement. If we do anything contrary, it will do APC a lot of incalculable damage. We in the South will not fold our hands if any group or individual attempts to derail this arrangement.
“We know what the South, especially the South West, did to ensure that Buhari emerged as the president in 2015. Before then, he had contested and lost on more than two occasions. It was when he entered into an alliance with South West leaders that it became possible for him to win the presidency. So, it will be unfair to deny the South the presidency in 2023,” he pointed out.
Top Stories