Magistrates who protested after Governor Ben Ayade refused to pay them over 2years salary arrears have now been withdrawn from sitting in courts. 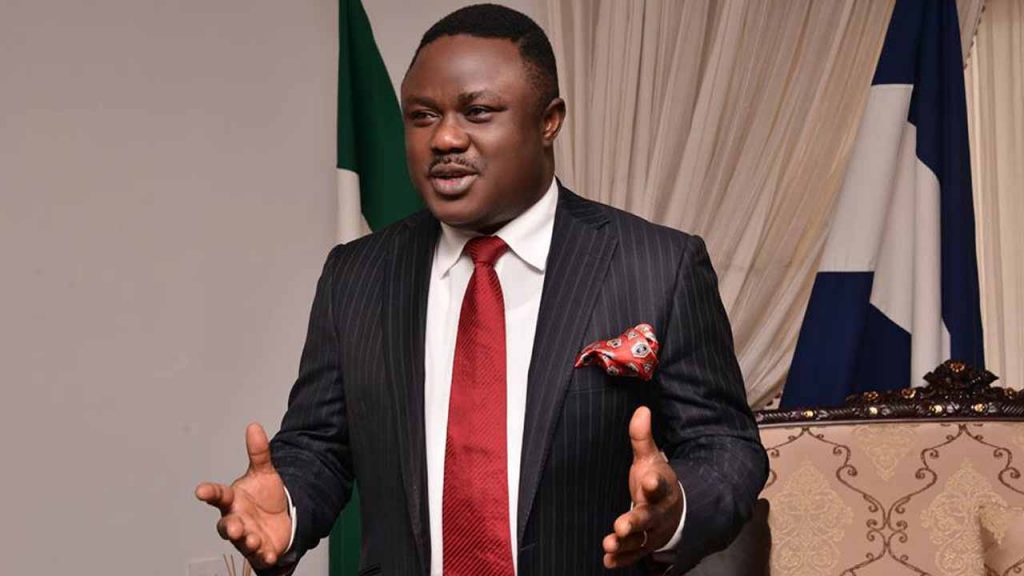 Governor Ben Ayade
29 magistrates who protested on Monday and Tuesday over non-payment of their salaries for two years by the Governor of Cross River state, Ben Ayade have now been withdrawn from sitting in courts.
The new order was given by the Cross River State Acting Chief Judge (CJ), Justice Effiom Eyo-Ita.
The 29 protesting magistrates had taken to the streets of Calabar to protest the non-payment of their two years’ salary as they have been going through hardship.
Instead of coming to their rescue, the Acting CJ decided to punish them more.
According to Nigerian Tribune, it would be recalled that Senior Magistrate Safiya Iyeh Ashipu of Odukpani Magisterial Division, had on Monday, January 4, led her two sons to the Government House, Calabar, with placards of various inscriptions, asking the governor to pay her 24-month unpaid salary.
The following day, 28 other magistrates in the same plight as Ashipu, donning their full regalia stormed the Governor’s Office in protest against the non-payment of their salary for 24 months. During the protest, one of them, Richard Bassey, collapsed and was revived by his other colleagues.
While Governor Ayade, through his media aide, Christian Ita, said that the magistrates were irregularly recruited into the judiciary as he (Ayade), did not sign off on the order for the final engagement, the state Attorney-General and Commissioner Tanko Ashang, had during and interaction with the representatives of the protesting magistrates, declared their recruitment into the state’s judiciary as “fraudulent” and threatened them with lawsuit for embarrassing the governor.
The fourth acting chief judge whose tenure expires in five days’ time, had claimed that only Ayade could determine the fate of the 29 magistrates as all entreaties for the governor to pay them had failed.
As at press time, no concrete arrangement had been made to pay off the 24-months’ salary arrears of the affected magistrates who have now been withdrawn from their various divisions.
This was just as nobody could volunteer information on what would happen to Justice Eyo-Ita, the fourth Acting Chief Judge to be appointed by Ayade, who has refused to appoint a substantive Chief Judge for the state since the former Chief Judge, Justice Michael Edem, retired on November 29, 2019.
While Edem, on his retirement, had announced Justice Akon Ikpeme, the next in rank to him as the Acting Chief Judge, Governor Ayade had rooted for Justice Maurice Eneji to replace Edem in contravention of the order of seniority in the state’s judiciary. Reason however, prevailed and Ayade later swore in Justice Ikpeme in acting capacity for a period of three months.
The governor, had in the attempt to make Justice Eneji the Chief Judge, reconstituted the state’s Judicial Service Commission (JSC) on November 27, and appointed Justice Agbojo Ogar (rtd) as chairman instead of the then sitting Chie Judge, Edem, who walked out of the inauguration in protest. The commission eventually recommended Eneji, but the entire state rose against that.
At the expiration of the three months, Governor Ayade has been appointing other Acting Chief Judges in the order of Justices AKon Ikpeme, Maurice Eneji (twice) and the current Effiom Eyo-Ita, who has five days left as Acting CJ, while the right successor, Justice Ikpeme, is still in service.
Nigerian Tribune gathered that while Ikpeme is of Akwa Ibom State origin, she is married to a Cross River man. Her father had worked and retired as a Permanent Secretary in Cross River State civil service. The development has forced the National Judicial Council (NJC) to blacklist Cross River State in all its activities, insisting that the order of seniority must be strictly followed.
Top Stories