Notorious bandits have ended the life of a young Catholic priest after abducting him in Niger state. 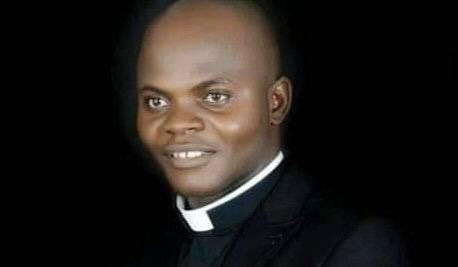 Rev. Fr John Gbakaan
A Catholic Priest has been killed after being abducted by bandits in Niger state.
It was gathered that Rev. Fr John Gbakaan was a priest of the Catholic Diocese of Minna, Niger State before his sad death.
According to reports, Gbakaan was killed on Friday, some days after he was abducted by the gunmen.
Another Catholic priest, Rev. Fr. Ugochukwu Ugwoke, disclosed this via his Twitter account @ FrUgochukwu on Saturday.
“Rev. Fr. John Gbakaan, a priest of the Catholic Diocese of Minna, Nigeria, was last night abducted and killed by some gunmen. In your charity, kindly join in praying for the repose of his soul,” he tweeted.
The post has however sparked outrage amongst Twitter users who expressed displeasure over the country’s security architecture, especially in the northern parts of the Nation.
A Twitter user, Adeyemi Kayode Fabunmi, said, “My heart and condolences are with the parishioners of the Catholic Diocese of Minna at this moment. May God console them, grant the late priest eternal rest. The perpetrators of this dastardly act must be found and prosecuted.”
“He was my priest during my service year in Lapai; he worked at Gulu, a sub-town in Lapai Niger State. May his soul rest in peace,” another user, @Domnic8Domnic, said.
@OkereBart said, “That’s what Christians are facing daily in Nigeria, especially clergymen. A heartless and callous murdering of priests and nuns in Nigeria. A real failed nation without any rule of law or government to prosecute these perpetrators.This goes on without any accountability. May his soul rest in peace.”
@onunwabifra said, “Is this the new trend in Nigeria? Few days ago, an Islamic cleric threatened to send in his people (terrorists) to pick up a Catholic Archbishop from the same area and have him 'crucified' (his exact word), for daring to call for good governance. And then this? Praying for his soul.”

Rev. Fr. John Gbakaan, a priest of the Catholic Diocese of Minna, Nigeria was last night, abducted and killed by some gunmen.

In your charity, kindly join in praying for the repose of his soul🙏🏽. pic.twitter.com/k9zehAq1Dt