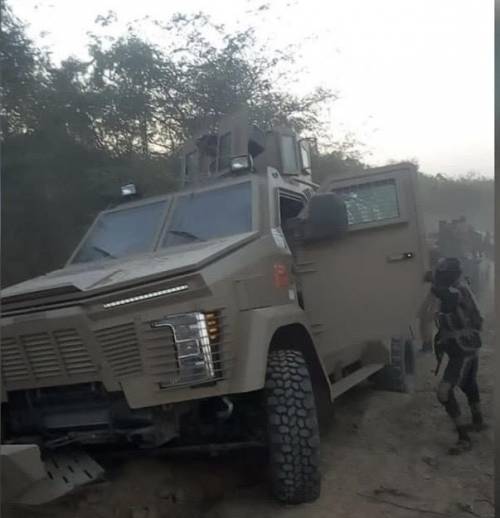 Nigerian army armoured personnel carrier captured by Boko Haram
A newly acquired armoured personnel carrier belonging to the Nigerian army has been captured and destroyed by Boko Haram terrorists.
According to Sahara Reporters, the capture and destruction was carried out by militants belonging to the Islamic State-backed faction of Boko Haram, the Islamic State West Africa Province (ISWAP), formerly known as Jamā'at Ahl as-Sunnah lid-Da'wah wa'l-Jihād.
According to ISWAP in a statement sighted by SaharaReporters on Tuesday, the Isotrex Phantom 2 APC was captured when the group ambushed some trucks conveying Nigerian soldiers at Gorigi, Borno State.
The group also claimed to have wounded and killed 30 soldiers and destroyed two other APCs.
The Insurgents had on Monday displayed a modified FV103 Spartan APC it said it captured from the military.
SaharaReporters gathered that about eight Isotrex Phantom 2 APCs were recently acquired by the Nigerian Army for the newly launched operation tagged ‘Tura Takaibango’ in the North-East theatre of operation, comprising Adamawa, Borno and Yobe states.
Chief of Training and Operations, Nigerian Army, Major General Nuhu Angbazo, who launched the operation on behalf of the Chief of Army Staff on January 7, 2021, said the operation would boost the efforts of troops of Theatre Command Operation Lafiya Dole to enable the army to deal with the emerging threats of the Boko Haram/ISWAP terrorists in North-East.
The Isotrex Phantom 2 is a new version of the 4×4 B6 Armoured Personnel Carrier (APC). Other than a five-door configuration, with 360° gun turret and with two or three escape hatches, the Isotrex manufacturing allows for the customisation of the vehicle for special needs and requirements.