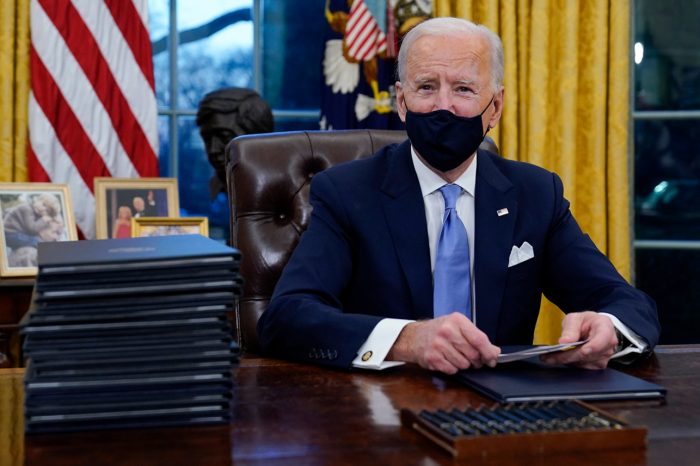 US President, Joe Biden
Joe Biden, the newly inaugurated President of the United States has been congratulated by world leaders.
Biden and his Vice President, Kamala Harris were sworn in yesterday to head the affairs of the United States for four years.
German Chancellor Angela Merkel praised the new president and vice president’s swearing-in ceremony as “a true celebration of American democracy.”
“I look forward to a new chapter of German-American friendship and cooperation,” said her spokesman Steffen Seibert, who quoted the chancellor on Twitter.
Also, Canadian Prime Minister Justin Trudeau, who butted heads with Trump over trade, said that “Canada and the United States enjoy one of the most unique relationships in the world.”
Trudeau said he looked forward to working with the new administration to promote climate action, clean economic growth, inclusion and diversity.
On his part, NATO Secretary-General, Jens Stoltenberg called Wednesday “the start of a new chapter.”
Stoltenberg was shaken by Trump’s frequent criticism, who often cast it as a drain on US resources.
Similarly, British Prime Minister Boris Johnson, who appeared to have a chummy relationship with Trump, congratulated Biden “on being sworn in as President of the United States” and Harris “on her historic inauguration” on Twitter.
Also, Scottish First Minister Nicola Sturgeon was blunt in telling Scotland’s Parliament Trump wouldn’t be missed.
“I’m sure many of us across the chamber and across Scotland will be very happy to say cheerio to Donald Trump today,” British news agency P.A. Media reported her as saying.
Reacting, Italian Prime Minister Giuseppe Conte tweeted that “this is a great day for democracy, reaching far beyond the American borders.”
On her part, Finnish Prime Minister, Sanna Marin gave special mention to Harris, saying “my warmest congratulations! I look forward (to) working with you and the new administration.”
She named the climate, equality, and human rights as areas of focus.
Meanwhile, Denmark’s Prime Minister Mette Frederiksen said on Facebook that she hoped Biden would become a unifying force “after the unrest and division” seen in American society.
Also, Australian Prime Minister Scott Morrison congratulated Biden and Harris and said “the Australia-U.S. Alliance has never been more important.”
Brazilian President, Jair Bolsonaro, an ally of Trump’s, congratulated Biden and said that he hoped the two countries could pursue a free trade deal, in a letter posted on Twitter.
Japanese Prime Minister, Yoshihide Suga, also congratulated Biden and Harris and said he looked forward to “working with you and your team to strengthen our alliance and realise a free and open Indo-Pacific.”
South Korea’s President Moon Jae In has expressed hope for a future strengthening of the two countries’ alliance: “America is back,” Moon wrote in a congratulatory message addressed to Biden on Twitter.
On his part, Israeli Prime Minister Benjamin Netanyahu, who enjoyed a warm relationship with Trump, also voiced optimism.
“I look forward to working with you to further strengthen the U.S.-Israel alliance, to continue expanding peace between Israel and the Arab world and to confront common challenges, chief among them the threat posed by Iran,” he said.
Meanwhile, the Palestinians, hope Washington will dial down its pro-Israel stance.
Palestinian President Mahmud Abbas said, “we look forward to working together for peace and stability in the region and the world.”
He also expressed his readiness for “a comprehensive and just peace process that would achieve the wishes of the Palestinian people in freedom and independence.”
Top Stories