A police inspector has lost his life in Abia after hoodlums attacked a police station in the state. 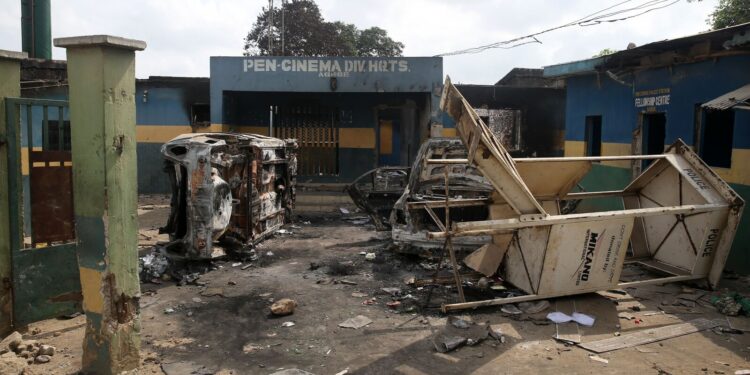 Police station razed in Abia
A police station has been set ablaze by hoodlums in Abia state.
According to NAN, the attack took place at the Umuoba Police Station in Isiala Ngwa North Local Government Area of Abia on Monday.
The report also said that a police inspector was killed in the tragic incident.
Police Public Relations Officer Geoffrey Ogbonna in the command confirmed this on Tuesday in Aba, observing that the hoodlums came on Monday at about 3 a.m.
Mr Ogbonna said that the hoodlums who attacked the police station also burnt the station and its operational vehicles.
“In the course of that attack, one inspector lost his life, another policewoman was seriously injured.
“The hoodlums then broke into the armoury of the police at the station and stole some arms, including the gun of the inspector who was killed.
“They also burnt down the station and the vehicles parked in the premises, including one of our serviceable patrol vans.
“The body of the inspector has been taken to the mortuary while the policewoman is being treated,” he said.
Mr Ogbonna said the police in Abia had begun investigations to unravel the cause of the attack.
He urged the residents to be watchful and be on the lookout in their communities for intruders and unknown faces.
He also called on hoteliers to volunteer credible information on certain visitors who would want to leave the hotels at midnight to commit crimes.
The police promised to protect the details of anybody who volunteered information that could lead to the arrest of the hoodlums.
Top Stories