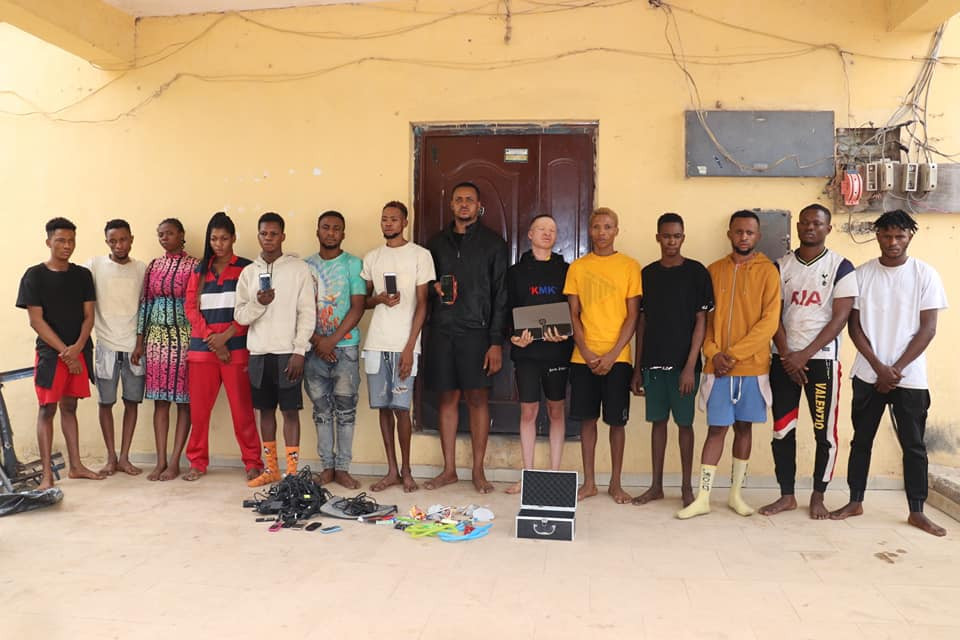 Suspected internet fraudsters arrested in Niger
Some internet fraudsters including two women have been apprehended by the Economic and Financial Crimes Commission.
The fourteen fraudsters were arrested in Niger state.
Spokesperson of the command, ASP Wasiu Abiodun, who confirmed this in a statement on Tuesday February 1, said the suspects were arrested by police operatives attached to Tundun-Wada Division on January 30, based on credible information.
He gave names of the suspects as  Amos Sheriff, 27, Omokhafe Nelson, 28, Amos Suleiman, 23, Uduafemhi John, 23, Sado Anthony, 26, Okumagbe Sheriff, 24, Chukwu Joshua, 23, and Peter Moses, 25, all of Edo State.
Others are Abdulrasheed Malik, 24, Isah Lawal, 24, Thomas Marvelous,19, Aigbona Gift 'f' 24, also from Edo state, 24-year-old Thomas Daniel and Braise Williams 'f', 24, both of Kogi State.
"The suspects were arrested at Farm Center area of Minna when Thomas Daniel allegedly stole a phone from Amos Sheriff's home after a visit. An alarm was raised and he was arrested. Preliminary investigation revealed that both Omokhafe Nelson and Amos Sheriff jointly rented a two flat apartment at the rate of two million, five hundred thousand naira where about twelve of the suspects live and converge with their friends," said Abiodun.
During interrogation, Sheriff and Nelson confessed to have engaged in internet fraud since year 2019 and embarked on coaching/training nine other suspects for same exercise.
They further confessed to have realized over twelve million naira from different victims through fake Bitcoin investment chat.  Part of the proceeds were used to pay for the house rent, establish a boutique valued about four million naira which is being managed by Aigbona Gift and buying a Lexus RX 350 at the rate of three million, eight hundred thousand naira which they had an accident with, on 25th December, 2020 at Edo State.
Items recovered from the suspects include 3 iPhones, one HP laptop, six Tecno phones, eleven laptop chargers, and Shisha box containing smoking gadgets. The case is under investigation.
Top Stories