A mother and her son have been caught red-handed on CCTV stealing from a wine shop in broad daylight. 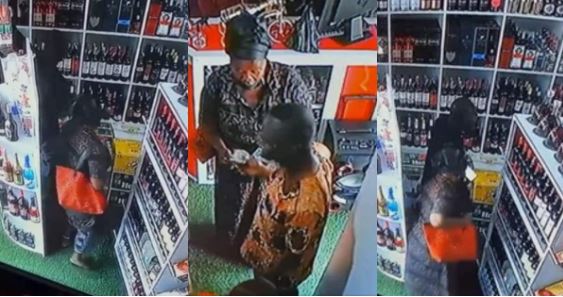 The mother and son caught stealing
A dramaitc CCTV video has shown the moment a mother and her son were caught stealing.
The incident took place at a wine shop located in Tema Community 9, Ghana.
The police are yet to confirm the incident and details about the young man and the woman.
But information circulating on social media indicates that the pair are mother and son.
The footage shows the woman's appearance clad in dark attire while her son wore a dark shirt over faded jean trousers and a nose mask.
From their attires, one could easily tell that they were still mourning the loss of a loved one.
In the video circulating online, the young man is seen carefully unboxing the expensive wine he took from the shelf and passing it to his mother, who goes ahead to hide it beneath her outfit.
The young man is also seen stealing wine and hiding it in his faded jean trousers.
The mother-son duo proceeds to the counter to pay for what they originally bought.
Unknown to the pair, CCTV cameras had captured them stealing and hiding other items from the wine shop.
Owners of the wine shop shared the video to appeal to the public for information on the two and are asking people to contact them.
Watch the video below: