Oh No!! Middle-aged Woman Dies In Fatal Accident In Anambra, Others Injured (Photos)


The victim lost her life after she was knocked down by a truck driver who was speeding.

Middle-aged Woman Dies In Fatal Accident In Anambra, Others Injured

A tragic accident which occurred 1000 blocks before Borromeo- round about Onitsha, today February 12. claimed the life of a middle-aged woman, leaving three others badly wounded.

A statement by the FRSC command in Anambra state states that Ogbodo Uche Peter, the driver of a Mark Truck with registration number AGB 338 YV knocked down the yet-to-be-identified middle age woman walking along the road.

Eyewitness report reaching suggests the accident was caused due to speeding.

Three other persons who sustained injuries through the accident were used to the hospital. The deceased female adult was rushed to Toronto hospital by the FRSC rescue team from Upper Iweka Outpost.

She was later confirmed dead by the doctor on duty and her body deposited at the Morgue.

The statement adds that the driver of the truck was apprehended and handed over to Nigeria Police. 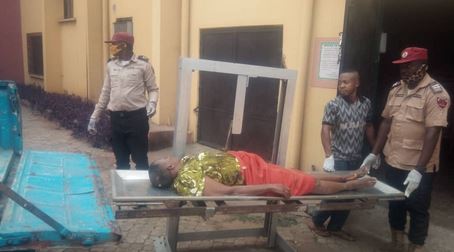