The private residence of the Deputy Governor of Niger state has been destroyed by an irate mob. 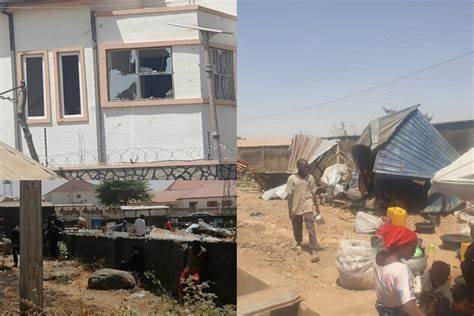 Angry mob destroy deputy governor's house
There was serious confusion in Minna on Tuesday after an angry mob destroyed the private home of the Deputy Govenror of Niger State.
It was gathered that the irate youths and traders shopping in the area’s mini-market joined hands to destroy the private residence of the top politician in the state.
Punch reported that the incident, according to a source, happened around 11.00am when the youths and the traders whose shops were demolished by the Urban Development Board unleashed their anger on the deputy governor’s house.
A source who craved anonymity told this medium that the marketers alleged that they were not given any quit notice by anybody but only to saw caterpillars demolishing people’s shops without allowing them to pack their goods and valuables that were inside.
The source also noted that the traders who demanded justice and equity also demanded the demolition of the house of the deputy governor as it is in the same place with the shops marked for demolition.
The source revealed that the traders lost millions of naira to the demolition as they could not pick even a pin from the site.
One of the shop owners, Mallam Muritala, lamented that the state government has brought him down totally, adding that they never gave him any noticed.
He said they came early yesterday morning and asked him to come out of the shop before they started demolishing it without even allowing him to pack his cash, goods and valuables.
He said, “I was just sitting in my shop and they said come out – their bulldozer was stationed in front of my shop – and immediately they brought me out forcefully. They brought down my entire shop without allowing me to pack my cash, goods and even other valuables. They have taken me back to zero levels, I’m left with nothing.”
Another trader whose shop was also demolished, Moses Dunia, accused the Niger State government of being power drunken for protecting the house of the deputy governor while making life hard for the common man in the area.
While reacting to the incident, the acting general manager of Urban Development Board described the allegation as baseless, adding that all the illegal structures in the area were duly served with notification of the demolition of illegal structures in the state.
Top Stories