Reports that students of the Government Secondary School in Jangebe have been released is false. 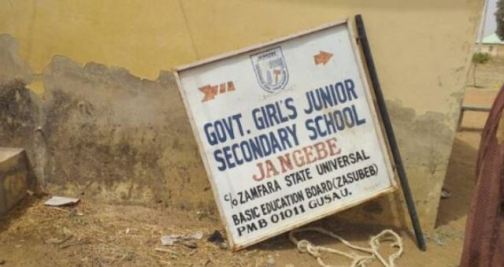 GSS, Jangebe
The Government of Zamfara state has clarified that students of schoolgirls of Government Secondary School in Jangebe, Zamfara State abducted by bandits on Friday have not been released.
Recall that earlier on Sunday, the abducted schoolgirls were said to have been released and at the palace of the Emir of Anka, waiting to be transported to Gusau, the state capital; however, the report has been debunked.
Debunking the report, the state Commissioner for Information and Culture, Suleiman Tunau Anka, in a tweet on Sunday afternoon that said that the students are yet to be released.
He asked people to ignore news regarding the release of abducted students of GGSS Jangebe, saying “It’s not true. But, the state government and securities are trying their best.”
The girls who were kidnapped on Friday were believed to have been taken to a forest by bandits who reportedly disguised as security personnel.
A source said the girls were kept in the forest between Dangulbi and Sabon Birnin Banaga in the Maru Local Government Area of Zamfara State.
The incident was the latest mass kidnapping for ransom by armed gangs in the North in recent weeks.
A week earlier, bandits had kidnapped dozens of pupils and workers of Government Science College in Kagara, Niger State.
The abductees were released on Saturday.
Bandits had also last December kidnapped over 300 schoolboys from Government Science Secondary School in Kankara, Katsina State.
Top Stories