Many people have been left stranded after transportation fares were hiked due to the scarcity of fuel in Abuja. 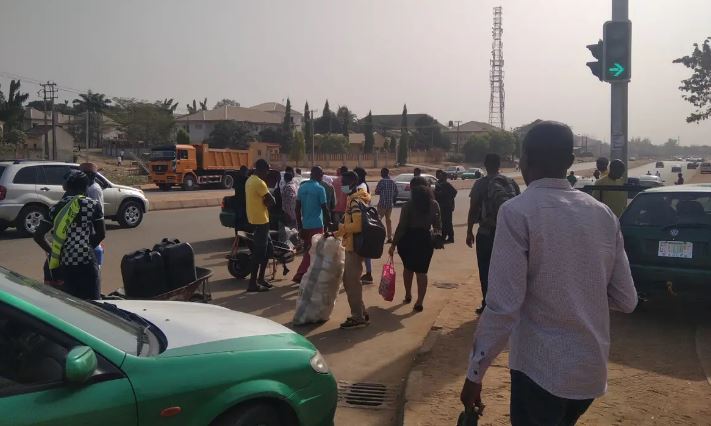 People trekking home
Many people ended trekking home due to hike in fares in Abuja on Monday.
It was gathered that the increase in fares was as a result of scarcity of fuel leading to long queues being witnessed at some filling stations.
A trip from Life-camp Junction to Berger and Wuse that hitherto cost N150 increased to N200 and Dei-Dei to Berger now N250 from N200.
Daily Trust recalls that the Minister of Petroleum Resources, Timipre Silver, two weeks ago urged Nigerians to prepare for an increase in fuel price as global oil price climbed above $60 per barrel.
The few fuel stations selling petrol had large numbers of motorists.
Motorists waiting to fuel their car at AA Rano fuel station at Utako.
A driver, Uchenna David, told our reporter that he had a hint of fuel scarcity last night due to the increase of cars in fuel stations.
Having that in mind, he said he came out early to fuel his car but met a long queue.
“I know it will be hard to get fuel today but as a car owner, I need to fuel today no matter what it takes. I was surprised not when with the queue because others will be thinking as I am with the situation yesterday.”
He urged the government to make up its mind on whether to increase the pump price so as to avoid subjecting citizens to hardship.
A taxi driver, Ibrahim Khalid, said the increase in transport fare was a combination of fuel scarcity and fewer cars plying the roads.
“Most cars are in fuel stations and few ones taking passengers have increased their price to make up with the time they wasted in fuel stations. We are not happy with the situation but it is not our wish to spend hours in stations waiting for fuel.”
“I hope the situation changes before the end of the week for everything to go back to normal,” he said.
Abigail Yakubu, a commuter, who expressed shock with the N50 increase to her destination, said she had been waiting for over 20 minutes to get a car at the normal rate.
Top Stories