It disclosed this in a statement issued by its spokesman, Muhammed Jalige, on Thursday night. 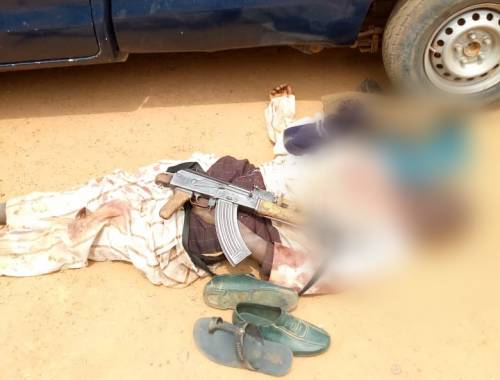 According to a report by SaharaReporters, the Kaduna State Police Command has said its operatives have killed a marauding bandit with AK-49.

It disclosed this in a statement issued by its spokesman, Muhammed Jalige, on Thursday night.

According to the command, the bandit was killed during a gun duel and his AK-49 assault weapon with two (2) rounds of 7.2mm live ammunition was recovered.

It added that that some of the bandits fled into the forest with varying degrees of bullets wounds, alerting the nearest communities to report anyone person found with bullet injuries.

The statement read: "On 11th March 2021, at about 1230hrs, the operatives of Kaduna Police Command, while on routine patrol along Kaya Road Patika District, Giwa Local Government Area of Kaduna State, intercepted some groups of armed bandits on a heinous mission."

The police revealed that the bandits were engaged in a fierce gun battle and successfully repelled them, adding that "in the process of the said duel, one bandit was neutralised and his AK-49 assault weapon with two (2) rounds of 7.2mm live ammunition recovered."

The statement continued: "The doggedness, uncommon courage and tactical operational strategy adopted by the operatives made the bandits to flee into the forest with varying degrees of bullets wounds.

"However, the corpse of the neutralised bandit has been deposited at Ahmadu Bello University Teaching Hospital, Shika while a manhunt for the fleeing bandits is being intensified.

"The command is calling on members of the communities within the said axis to be watchful and report any suspicious person(s) with injuries to the nearest police formation."