Dr. Odumakin made this revelation yesterday while speaking with newsmen in Odumakin’s residence at Moro, Osun State. 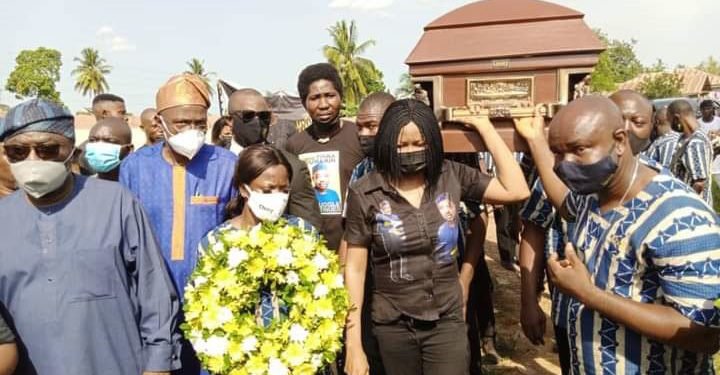 According to a report by The Nation, Dr. Joe Odumakin, the wife of the late Afenifere spokesman, Yinka Odumakin, revealed yesterday that her late husband promised to write his story when he comes back from the hospital.

But he never did.

He died on Friday, April 2, at 54 after battling with respiratory problems occasioned with COVID-19 complications.

Dr. Odumakin made this revelation yesterday while speaking with newsmen in Odumakin’s residence at Moro, Osun State.

The remains of the late Afenifere spokesman yesterday arrived at the country home of the activist, Moro town in Ife North Local Government of Osun State.

A delegation of Osun State Government, led by the Chief of Staff, Dr. Charles Akinola, received the corpse at Asejire area, the boundary of Osun and Oyo states.

Akinola, addressing the wife of Odumakin, Dr. Joe Okei Odumakin and other family members from Lagos State, informed them that the delegates received the remains on behalf of Governor Adegboyega Oyetola.

He said, “Mournfully and painfully, our brother, an illustrious son of Osun, one of one finest, Yinka Odumakin. His loss is a great loss to the nation generally. The governor has asked us to receive him into the state and escort his body to his final resting place. Odumakin was not just a leader of conscience; he is one of the finest human right leaders. He was not just a nationalist; he was the finest Yoruba nationalist.”

Responding to the delegations, Joe Okei Odumakin, wife of the deceased, said, “My husband was a comrade, my friend and soulmate. Here is Yinka’s corpse. He owns a part of me as I owe a part of him. If I come back to this world over and over, I will get married to him.”

We are grateful to Osun State for the great reception at this sober moment. When a spokesperson stops speaking, you know how heavy it is, but our consolation is that Yinka’s ideal legacies live forever, she said.

The remains got to the residence of the activist around 3:15 PM at Ewuru street, Moro via Origbo Anglican Grammar School.

The corpse of Odumakin was later moved to a morgue against

preparations for his final lying in the state and private interment at the premises of his house in Moro today, Saturday.

The grave for his final internment has been dug and they are mounting canopy for the final lying in state at the open field of Origbo Anglican Grammar School, Moro.

My husband was against Massive killings- Joe

Speaking with newsmen in Odumakin’s residence at Moro, Joe said, “Comrade is the friend of the media, he was a complete family man, a dedicated patriot, tomorrow is the lying in state from 8-10 am. There would be service and few tributes. After that, he will be interred in his house here. He loves the media, without the media his work would have been very difficult because nobody will help him disseminate his messages. He was against massive killings; he was for true federalism and a restructured Nigeria.

“He was for Nigeria that works; he was for the protection of human rights; he was after doing things right. This is the heaviest part of my life to speak about this comrade after knowing him for over three decades. One thing is certain that his ideas are going to live forever. What he stood for will never die and the moment that his physical body will be interred we want to plead that people should rededicate their lives for a better Nigeria for a race that works.

“Right from the time he went for three meetings and as the time that his physiotherapist told him that his oxygen was low even in the ambulance before going to the hospital, he was there as a prolific writer, writing an article; he was there as a committed patriot dishing out leaflets; he also put up different releases. He said when he comes, he will write his story. He’s no longer here with us but he will never die, his legacies will live on. After 54 years of sojourn on earth; he was for no corrupt society. I salute him,” she said.