'My Sister-In-Law Is Among The Greenfield University Students Killed By Bandits' - Man Cries Out To Presidential Aide, Ogunlesi


The man, Yamai said his mother-in-law has been unable to eat or even take a shower since Dorathy was abducted on Tuesday April 20. 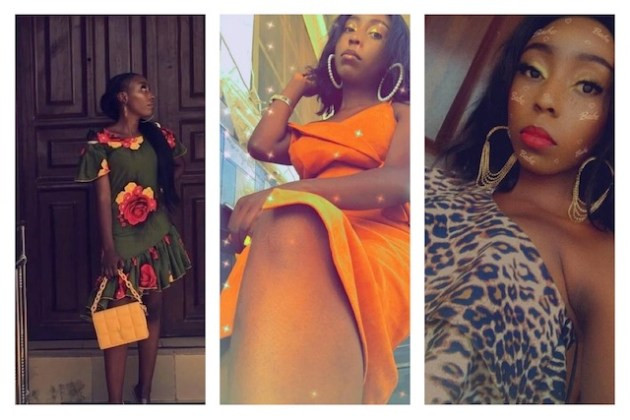 A truly heartbroken Nigerian man whose sister-in-law called Dorathy Yohanna, was among the three Greenfield University students killed by bandits, has written an emotional letter to the presidential aide, Tolu Ogunlesi, asking him to talk to his boss.

The man, Yamai, with the Twitter handle, @ydcoal, said his mother-in-law has been unable to eat or even take a shower since Dorathy was abducted on Tuesday April 20. He said it is devastating that the answer to her prayers for the safe return of her child is now the news of her demise in the hands of those who abducted her.

His tweets read: ''Hi @toluogunlesi, my sister-in-law was among the 3 dead students found today from Greenfield University. We are all trying to unpack our feelings. People’s children have become sports for bandits & kidnappers.

"I know you get a lot of stick on here And I know you get; people are angry. I’m very angry right now because there’s just so much I don’t understand anymore. What’s the purpose of life as a Nigerian? What’s the sole responsibility of a government for/to the people?

"I’m marginalised as a Christian in my state. I go elsewhere and I’m being stereotyped. Today, my sister is dead. I can not, for the life of me, imagine what she went thru in the hands of these evil men before her untimely death. Can you? How do I comfort my wife?

"How can a mother bury her child? What’s the purpose of thoughts & prayers? Do we deserve to live and die like this in our own country? Do you understand why some of us choose to be “slaves” elsewhere than “kings” at home?

"No jokes here... The pain is unbearable. Everyone deserves the benefit of doubt, but do you think this government still deserves any? I need answers. They still have 20 more kids with some to be killed tomorrow if they don’t get what they’d asked for.

"Where do we go from here Tolu? Do we worry about tomorrow? Do we believe in a fair, just and righteous God? My mother-in-law hasn’t eaten or showered in 3 days since her daughter, whom she saw on Monday, got kidnapped & this death was the answer to her prayers.

"You’re not the president, I know, but please talk to your boss. The evil we do or our negligence surely does come around one way or the other. That’s the circle of life. Do something!! Bless you!!''

Responding, Tolu wrote; ''I’m so sorry to hear this Yamai. My deepest condolences!'' 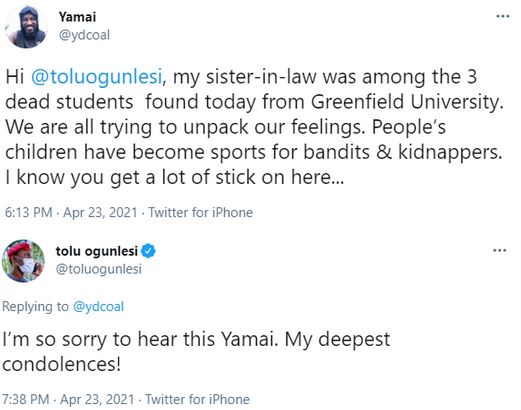