Policemen in Italy have arrested a notorious gang of Nigerians operating in the country. 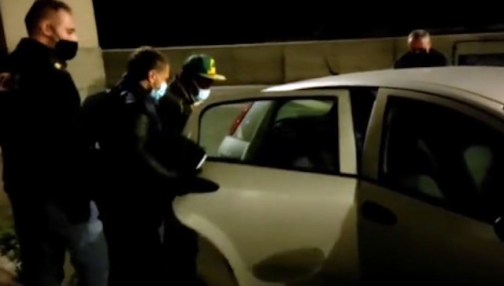 A Nigerian Mafia member of Black axe, 3rd right being arrested on Monday. Photo ANSA
At least 30 Nigerians belonging to a mafia group have been arrested in Italy.
The police in Italy said the group is connected with the Nigerian Mafia organisation Black Axe.
The arrests were carried out in raids in 14 provinces. Police said 25 searches were executed.
Among those arrested was the head of the gang, not yet identified.
“We have apprehended the leader of a major organisation,” said the police.
The Black Axe operation stems from a probe in L’Aquila, the capital of the Abruzzo region.
Those arrested have been charged with mafia association, drug trafficking, illegal immigration, prostitution, ‘romantic fraud’, Internet fraud and money laundering by buying and selling Bitcoins.
They face almost 100 charges, police said, according to a report by ANSA.
It was the second raid against the Nigerians in few months.
Italian Mafia investigators have recently conducted several large-scale operations with dozens of detentions.
On Monday, they executed 99 arrest warrants in the southern city of Bari as part of an anti-Mafia operation, news agency ANSA reported.
The suspects were leaders and associates of the Strisciuglio Mafia clan, according to the police.
They face charges including extortion, drug trafficking and Mafia association, among others, ANSA reported.
Police had already staged raids targeting the same clan on similar accusations in March.
The majority of those arrested were to be placed in custody.
Police were set to release further details later today.
In January, a massive trial of more than 300 suspected members of the ‘Nrdrangheta Mafia organisation began in the city of Lamezia Terme
Top Stories