Spokesperson of the command, SP Gambo Isah, who paraded the suspect before newsmen at the police headquarter on Tuesday, May 11, said Danmaiwaina was arrested after he was caught sodomizing a minor boy. 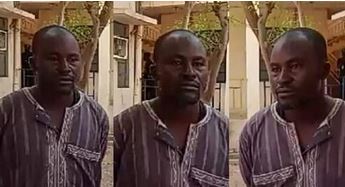 A 31-year-old notorious homosexual identified as Muhammadu Auwalu Aliyu, alias Danmaiwaina who sexually assault underaged children for ritual purposes has been apprehended by officials of the Katsina state police command.

Spokesperson of the command, SP Gambo Isah, who paraded the suspect before newsmen at the police headquarter on Tuesday, May 11, said Danmaiwaina was arrested after he was caught sodomising a minor boy.

"ARREST OF A NOTORIOUS HOMOSEXUAL WHO SPECIALIZED IN ABUSING MINORS: On 10/05/2021 at about 21:00hrs, based on a tip off, the Command succeeded in arresting one Muhammadu Auwalu Aliyu, ‘M’, alias ‘DANMAIWAINA’, ‘M’, aged 31yrs of Abattoir Quarters, Katsina, a notorious serial rapist who specialized in abusing minor children," Gambo stated.

"Nemesis caught up with the suspect when he was arrested in connection with having unlawful sexual intercourse with a minor (name withheld) against the order of nature. In the course of investigation suspect confessed to the commission of the offence and stated that a ritualist gave him the idea to do it as a ritual right or obligation so that he can get anything from any VIP or rich person within the society. Investigation is ongoing." he added.

Speaking to newsmen, the suspect said, “I have abused the boy for the fourth time after I was offered with a charm by a ritualist during his lifetime that I should be doing this action. And according to what the ritualist told me then, if I go to anyone that is holding a big position and advise him on what I considered as a crime, he/she will surely listen to me and act on it"