A warning has been given to Bola Tinubu not to contest the 2023 presidential election or lose his life. 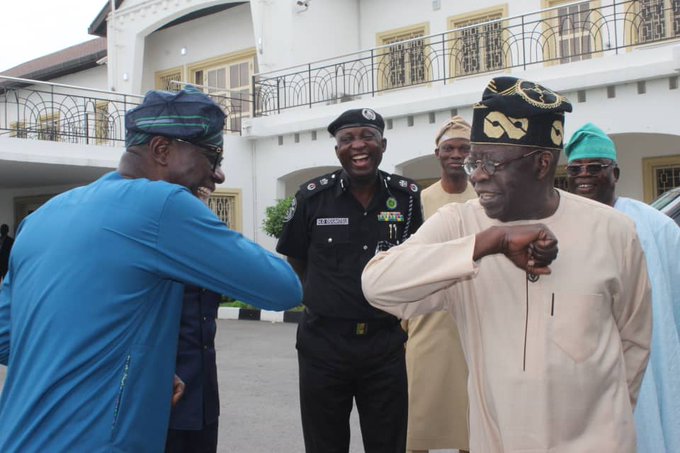 Sanwo-Olu and Bola Tinubu
National leader of the All Progressives Congress has been warned by a traditional priest and seer to forget any plan to contest in the 2023 presidential election.
According to Sahara Reporters, HRM Augustine Bola Adegunloye the priest, who is also called Egbeji Ologun, revealed that he told MKO Abiola to not run for President in 1993 but the late businessman and politician defied his warning.
The seer, however, stated that Tinubu should learn from the late Abiola in order not to share his fate by ending up in prison and getting killed.
Adegunloye said this in a viral video when reacting to the political ambition of the APC chieftain of succeeding President Muhammadu Buhari in 2023.
“Tinubu, if care is not taken is going to end up in a prison yard. You know those who used to go to him, they are eating his money. He said he is Jagaban. He’s Jagaban of Hausaland. Those who are taking care of goats and cows. He’s their Jagaban. Who is Jagaban? So, he has to rethink and make up his full steps so that he cannot sleep and die,” Adegunloye said.
He recounted how the late Abiola mocked him, when he told him not to contest saying he was hungry and gave him N25,000.
“Because, this is how I told (MKO) Abiola. This is how I told him. I went to Abiola’s office personally that morning. Baba, God has done great things for you. You have money, you have everything. Why do you want to become a Head of State? He said don’t worry. When all these Babalawo are hungry, that’s how they are going out about. He gave me N25,000.
“I said, 'Baba I thank you very much. God will be with you'. How does he end? He did not end well. He died. So, that’s what is going to happen to Tinubu now. If Tinubu doesn’t take care, he will die like a goat,” Adegunloye added.
Top Stories