We Are Not Intimidated By Governor El-Rufai's Threats – NLC


The NLC has fired back at Governor of Kaduna state, Nasir El-Rufai over comments he made recently concerning strike action embarked by workers. 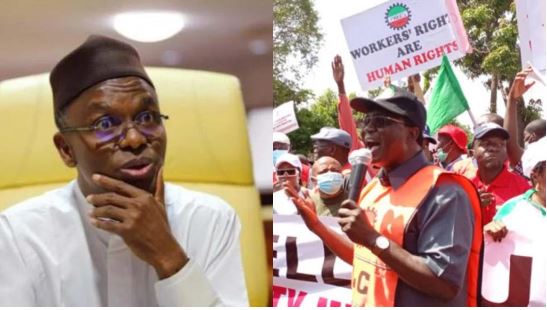 El-Rufai and NLC
The Nigeria Labour Congress has tackled the Governor of Kaduna state, Nasir El-Rufai, saying he cannot intimidate it.
The NLC assured that it stands ready to be bound by the FGN-brokered peace/MoU, saying that no single party to an agreement can sustain the agreement.
The Head of Information and Public Affairs, Nigeria Labour Congress, Comrade Benson Upah, in a rejoinder to the broadcast made by governor Nasir El-Rufai after the suspension of the 5-day warning strike in the state, said, “Ordinarily we would not have responded to this address which is laced with uncomplimentary remarks, accusatory comments, falsehood and threats against us. However, to remain silent would mean admission of guilt.”
The NLC said they did not assault the rights, freedoms and livelihoods of the citizens of Kaduna State even though they were in Kaduna State for four days in exercise of the rights conferred on them by the 1999 constitution (as amended) and ILO Conventions 87 and 98 (freedom of association/expression/right to unionisation), and the corpus of Labour Law ( right to protest and strike).
He explained that their presence in Kaduna was made inevitable “by the refusal of Kaduna State Government to dialogue after our letter of April 9, 2021,” stressing that their letter was a response to the letters of sack issued to workers from March 31 to April 1 in utter violation and contempt of their fundamental terms of contract of employment and redundancy law as per Labour Act S. 20.
Comrade Benson Upah said their coming to Kaduna followed all due process permitted by the body of Labour Law.
“When we did come into Kaduna State on the appointed date, we came publicly and not stealthily. We withdrew our services and marched peacefully along Independence Way/Muhammadu Buhari Way to NEPA Roundabout in line with the provisions of the law but we were assaulted and violated by a mob recruited, mobilised and deployed by the State Government,” he explained.
He added, “Some of the victims of the attack are still in hospital receiving treatment. It is equally important to point out that in the course of our protest march, we neither visited any office let alone harass anyone out of any. We strictly kept to these two streets without breaking a twig or plucking a flower.”
He stated that they were orderly and peaceful and not lawless as alluded to by Mr Governor, explaining, “Indeed, if any one was lawless, it was the State Government that took pride in engaging thugs and vitriol to the point of boasting that by the time they were done with us, we would never again come to Kaduna.”
The statement noted that the threat would have been carried out but for the thoughtful presence of the security agencies.
NLC lamented that not satisfied even after they had suspended the action on Wednesday following the intervention of the Federal Government, the State Government deployed an amarda of thugs to our state secretariat on Thursday morning to seize the place.
Upah explained that the duplicity of the State Government was exposed by the unsuspecting old women it had lured with a promise of palliative only for them to find themselves ranged against us, saying that some of them wept in shame and pain and left to the chagrin of those that misled them.
The NLC observed that to the substantive issue of right-sizing, they believed that government’s policy of right-sizing as claimed by the Governor cannot be at the expense of the legal or humanitarian rights of workers.
In propaganda, according to NLC, “truth is sometimes mixed with falsehood with the purpose to confuse or create doubt”, guessing that this must be the intent of the State Government when it introduced the issue of the National Minimum Wage in the broadcast, adding that for the benefit of those who cared to listen, their action had nothing to do with the National Minimum Wage.
According to NLC, “We did not impose misery on the people of Kaduna State as is alluded to here. Between us and the State Government, the people know who sacked them en-mass without their terminal benefits, violated the fundamental terms of their contract of employment, pulled down their houses in Malali, shops along virtually every street corner or in the markets…..destroyed their only means of livelihood without providing an alternative. The people know who destroyed their lives and their city, promoting insecurity.”
The NLC said they were completely at a loss by the vituperations of the Governor even after the Minister of Labour and Employment had apprehended this dispute at the instance of the Federal Government and an MoU signed between the State and NLC.
According to NLC, “It is well with us either way. We have the meeting of the National Executive Council scheduled for today Tuesday 25th May, 2021 to de-escalate or escalate this process.”
Top Stories