Shocking! 'Alien' Figure With Long Limbs Seen Walking Along Bridge In The Middle Of The Night (Video)


Motorcyclists swerve out of the way to avoid the figure which stops and stares at them, before continuing its slow walk. 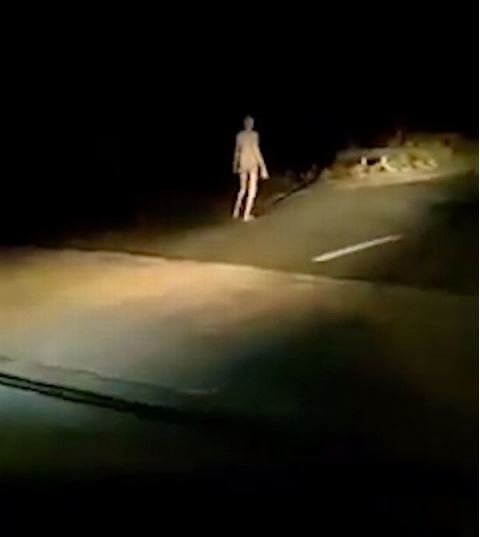 In what will come across as a really shocking development, a very strange humanoid-like figure has been spotted strolling across a road in India – leaving witnesses convinced paranormal activity is at play.

The bizarre creature was filmed walking on a bridge at night in Jharkland, eastern India.

In the video, filmed on Friday (28 May) at the newly-constructed bridge near Chadwa Dam in the Hazaribagh area, the creepy figure can be seen walking steadily along the bridge.

The gangly-looking shape appears to have long arms and legs, pale white skin, and a very skinny torso.

Motorcyclists swerve out of the way to avoid the figure which stops and stares at them, before continuing its slow walk.

Witnesses later claimed the figure was anything from a ghost to a witch – with some even convinced it was an alien.

The video was uploaded on Twitter and watched nearly 5,000 times, sparking a fierce debate about whether the mysterious figure was paranormal or just part of a hoax.

One person commented: "Wtf is that creature in Jharkland? Looked like an alien to me."

Another person pointed out something strange happening in the sky 13 seconds into the clip, writing that "there’s a faint red light in the sky".

"In the beginning, you can see it’s trying to reach to something," they said.

Using the hashtag "aliens", the believer continued: "But at 13th second, watching the red light thing fly away, it stops as well. If points connected, it kinda seems real."

But another viewer reckoned it was likely just a naked human going for a walk in the moonlight.