A married man and woman caught while sleeping with each other have been disgraced in public. 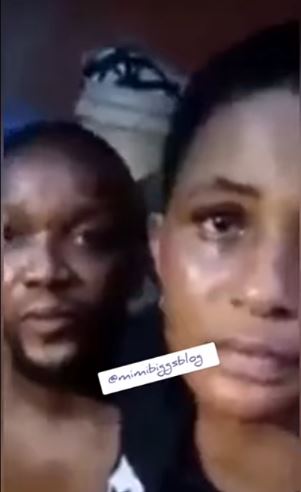 Cheating couple
A married man has been disgraced in public after he was caught sleeping with a woman.
It was gathered that the two are neighbours.
After they were caught, the two were interviews.
The woman known as Mama Purity disclosed that she helps the man with house chores while he gives her money in return.
The man who was identified as Baba Basiru also admitted to sleeping with the woman.
While confessing after he was caught, the man on tape confessed that he loves sleeping with his wife more than the person he was caught cheating with.
However, the woman said she couldn't resist the man because he knows how to handle her in bed more than her husband.
The mob didn't spare the man as they beat the hell out of him.
Watch video below:
Top Stories