When arrested, the suspects revealed that they use a hammer to hit their victims, leaving them unconscious, before taking their bikes. 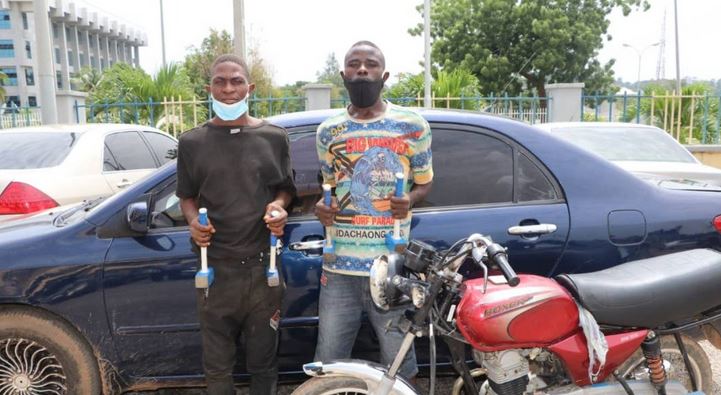 Two notorious robbers have been arrested by the FCT Police Command for snatching motorcycles along Galadinmawa-Durumi axis.

ASP Mariam Yusuf, Police Public Relations Officer, made this known in a statement on Sunday.

The suspects, Bello Waziri (24) and Yusuf Ali (21), were arrested by operatives attached to the Galadinmawa Division.

Yusuf said the duo, who were caught in the act, confessed to being members of a three-man syndicate responsible for snatching motorcycles from riders at night.

Waziri and Ali revealed that they use a hammer to hit their victims, leaving them unconscious, before taking their bikes.

Exhibits recovered include four hammers, one motorcycle and one blue colour Toyota Corolla.

The suspects will be arraigned after investigation. A manhunt has been launched to apprehend their fleeing colleague.