The twenty-one-year-old housewife, who was heavily pregnant as at the time of the incident, had stepped out of her immediate compound at about 11:55pm to ease herself. 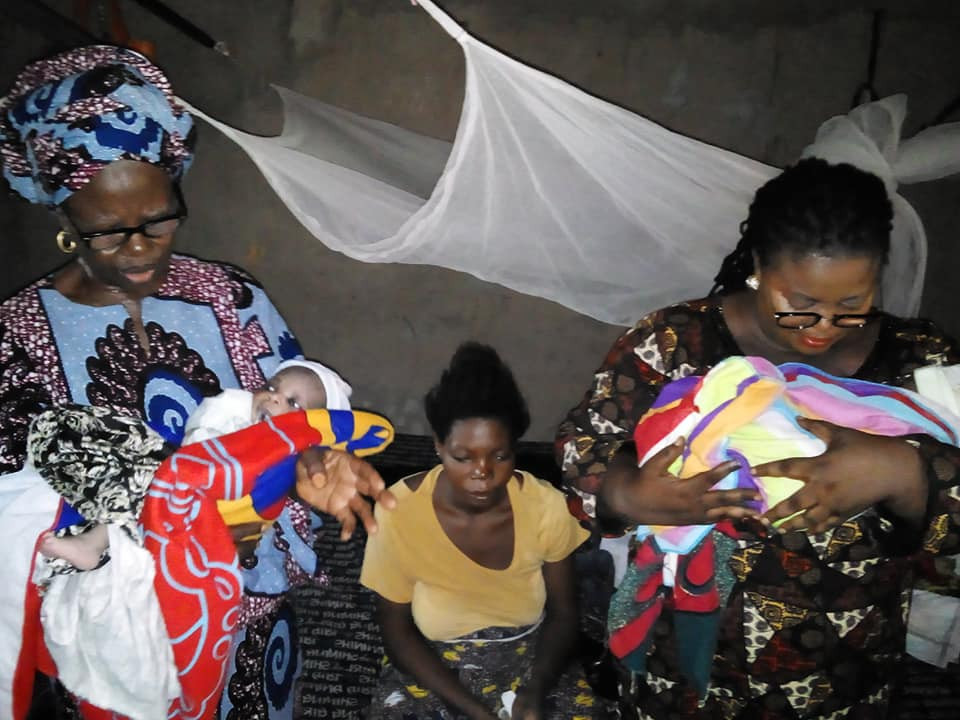 Well-wishers with the woman

The story has been told of Jenifer Uta, a woman who escaped being killed by suspected Fulani herdsmen.

When suspected herdsmen invaded Abagana Internally Displaced Persons (IDP) Camp situated on the outskirts of Makurdi, Benue State capital, about three weeks ago, Jenifer Uta, was one of the first to notice their terrifying presence.

The twenty-one-year-old housewife, who was heavily pregnant as at the time of the incident, had stepped out of her immediate compound at about 11:55pm to ease herself. On a second look in the dark, she noticed that some strange persons had sneaked into their camp. That was no good news, she promptly cautioned herself:

“When I looked again, I noticed they were herdsmen going by their language and their dressing. I saw that they were also all armed and smoking. I knew something bad was about to happen and my heart skipped several beats.

“Frightened, I quietly crawled back to the house and alerted my husband, who in turn, quietly alerted the members of our compound about their presence. Before long, the entire community was informed of their strange visitors.”

Her husband, Isaiah, recalled that it was while he was trying to alert other members of the community about the strangers that they sighted him and shot him at the back:

“When my wife woke me up and told me about what she saw outside. I peeped through the window and saw that what she said was true. I saw them moving about in the dark. I quickly alerted the members of our compound and was on the move to alerting others, when they shot me.

“The wicked herdsmen also shot my mother. I don’t know how my heavily pregnant wife managed to escape the terror of that day. I had to feign death following the shot, before they left me and moved on with their onslaught.”

Isaiah and his mother were among nine injured members of the IDP community, who were evacuated to Benue State University Teaching Hospital (BENSUTH), for medical attention. He was lucky to be alive to tell his story.

It was while his pregnant wife was taking care of him and his mother that she succumbed to the pangs of labour. After several hours, she was delivered of a set of male twins through caesarean operation a week after the incident.

Isaiah told Daily Sun: “My family is an IDP from Gborgyo village of Guma Local Government. We were first displaced in 2011 after several people were killed and a lot of property destroyed by herdsmen in our village. That is why we ran to Abagana community.

“We tried to go back to our village in 2017, but we were attacked by herdsmen again this April. We narrowly escaped back to Abagana community. Unfortunately, the Abagana community was also attacked.

“The babies are our first set of children since we got married. We have decided to name the boys after Governor Samuel Ortom because of his stance against open-grazing. One of the boys shall be called Samuel and the other Ortom. The naming ceremony will be conducted soon.”

Adakole Daniel, a youth activist with Civil Society Organization (CSO), took up their case. He said it was only by the grace of God that the family survived the attack. He called on well meaning Nigerians to come to the aid of the family to meet their immediate needs.

The governor’s, Mrs Eunice Ortom, through her Eunice Spring of Life Foundation (ESLF), presented some food items, baby diapers and other essential supplies to the new born.

The items were presented to them at their temporary abode close to Again Toll Gate, Makurdi. Professor Magdalyne Dura and Saratu Orga, board members of the foundation, said the intervention was a prompt response to the information about the family’s plight.

Jenifer expressed gratitude to the foundation for meeting her family at the point of their need. She said the provisions would go a long way to ameliorating the difficulties she and the babies have been undergoing.

She admitted she had the fear that she would not have a successful delivery due to the trauma from the attack. She thanked God for keeping both her and the twins.

The father also thanked the governor’s wife and ESLF for the gesture: “Things have been difficult especially following our close shave with death in the hands of suspected herdsmen.”