PUNCH Metro had reported that officials of the FHA on Sunday demolished over 12 churches, two mosques, a market and a car mart on 2nd Avenue, FESTAC Town. 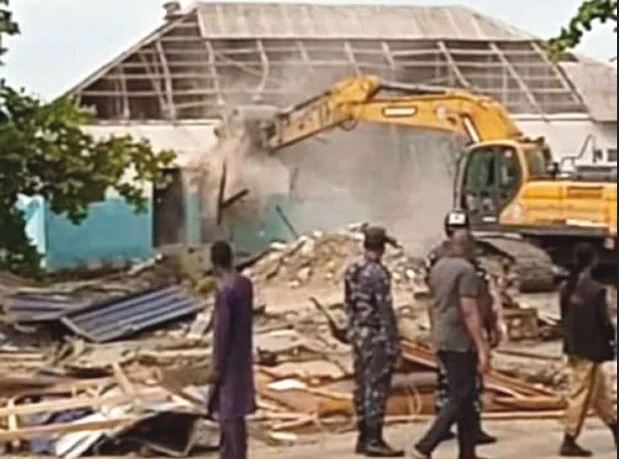 According to PUNCH Metro, pastors of some churches demolished in the FESTAC area of Lagos State by officials of the Federal Housing Authority have urged the Federal Government to call for dialogue between them and the agency, and also compensate them.

PUNCH Metro had reported that officials of the FHA on Sunday demolished over 12 churches, two mosques, a market and a car mart on 2nd Avenue, FESTAC Town.

It was gathered that the demolition started around 5am and continued till around 3pm.

According to the pastors during a press briefing on Tuesday, the agency served them a seven-day notice to vacate the area, however, before the expiration of the notice, their buildings were demolished.

The Overseer of Christ Gospel Church International, Pastor William Ehiorenren, who expressed shock over the incident, said the church had written the agency to request an extension of time, which he claimed was granted, but to his surprise, his church was pulled down.

He said, “They brought a notice of seven days suddenly and we called our lawyers to step in and a letter was written to them to give us an extension; they accepted and acknowledge the letter that nothing would happen to the churches, but we were shocked that they came even before the seven days to demolish our church building.

“Some of us are landlords; we have our papers; some pay to landlords, but all our churches were demolished. We have spent millions on the buildings; they saw these investments and said nothing about them; they choose to ignore our pleas as if we are animals and came on Sunday to demolish the churches.

“They took our rights from us; the seven-day notice was wrong; we want the government to step in, because the FHA has stepped on our rights. They left some churches unaffected because they have people in government, but they said some have gone to court and won the case so, they were allowed to retain their structures, but we all built solid structures that are worth a lot of money.”

Another pastor, Michael Okochukwu, urged the Federal Government to compensate them for their losses.

He said, “The incident was too tragic, we could not believe that in Nigeria, they could demolish churches without a court order.

“They served us a seven-day notice after marking the churches for demolition in a place where we have spent between 13 and 20 years. We have landlords that we pay rent to and if there were problems, they ought to liaise with our landlords to relate to us, but we never heard anything from our landlords.

“We need justice; we need to be compensated adequately or allocated another land. There are laws guiding property development and the government cannot be lawbreakers. We want the world, the church in Nigeria, CAN and the PFN to hear us and come to our rescue. The government should invite the churches for proper dialogue.”

When contacted by our correspondent, the Head, Public Affairs, FHA, Kenneth Chigelu, said a press briefing was slated for today (Wednesday) where the matter would be addressed.

He said, “We have a briefing in Lagos concerning the restructure of FESTAC, but without pre-empting what will be said tomorrow, did the churches tell you that the land belongs to them or that they have approved building plans?

“It’s high time we began to do things right in this country; you can’t just enter into plots of land and stay there illegally. By tomorrow (Wednesday), we will address all these things.”