Tebogo Tsotetsi says he no longer believes that his girlfriend, Gosiame Thamara Sithole, gave birth to their children. 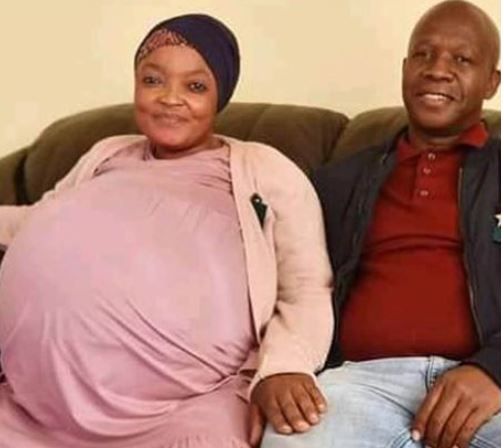 Gosiame Thamara Sithole, a woman who stunned the world when she reportedly gave birth to ten babies has gone missing, according to the supposed dad of the babies.

Tebogo Tsotetsi says he no longer believes that his girlfriend, Gosiame Thamara Sithole, gave birth to their children.

On June 7 Gosiame became a sensation after it was reported that she gave birth to seven boys and three girls through C-section in Pretoria, South Africa.

Pictures of the babies, who were said to have been conceived naturally and arrived after 29 weeks, and their proud mum were shared online.

But after the government and hospitals questioned the multiple birth, Tebogo Tsotetsi's suspicions grew and he has now concluded that the "decuplets" do not exist.

The disappointed dad released a statement on Tuesday, June 15, apologising for any "inconvenience and embarrassment" and said that his family has "concluded there are no decuplets".

According to News24, a missing person case has been opened to locate the missing woman and bring her home safely.

Tebogo Tsotetsi' statement read: "He (Tsotetsi) made several attempts to visit his girlfriend and the babies but she has failed to disclose her whereabouts and the condition of their babies.

"The current uncertainties and public discourse about the decuplets is of major concern to the family, especially in the absence of any proof of the decuplets existence other than telephonic and WhatsApp messages from the mother.

"The family has resolved and concluded that there are no decuplets born between Tebogo Tsotetsi and Gosiame Sithole, until proven otherwise and wishes to apologise for any inconvenience and embarrassment."

Gosiame and partner Tebogo Tsotets already have a pair of twins together so the additional ten babies would have brought their kids to 12.

Doctors initially believed Gosiame was expecting six babies, and Tebogo said at the time that he found even that unbelievable.

Family spokesman Russell Baloyi told Times Live: "We realised that as messy as the situation was for the country, given the conflicting statements that have been coming out, it’s about time we put this thing to rest and work on the facts.

"The whereabouts of the mother are still unknown. In terms of the pregnancy, the reality of it was that the mother was pregnant."