Usman had been critical of the roles of the Nigerian leaders during the recent EndSARS violence which engulfed several parts of the country. 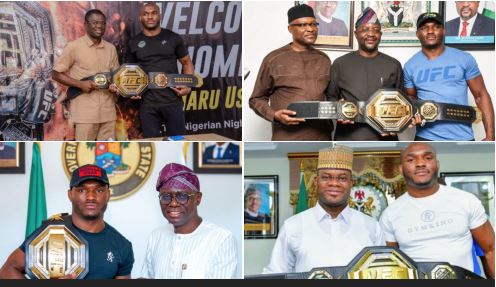 Usman had been critical of the roles of the Nigerian leaders during the recent EndSARS violence which engulfed several parts of the country.

Sowore noted that it was unfortunate that Usman, who had earlier knocked the politicians for their repressive actions during the EndSARS crisis, would return to the country and pose for the camera with the same political actors.

The activist stated this on his Twitter handle, saying, "EndSars @USMAN84kg once asked 'where is President Buhari' during the #Endsars struggles but once he arrived Nigeria recently he was cavorting with politicians who murderers and persecuted #Endsars protesters (sic)! Hypocrisy at #UFC level!"

He also posed with the Edo State Deputy Governor, Philip Shuaibu, and with the Minister of Youths and Sports Development, Sunday Dare in another photograph.

Meanwhile, some commentators also shared Sowore's concern about how the political class are quick to celebrate Nigerians in the diaspora but fail to develop talents in the country.

A commentator said, "Nigerian elites and corrupt politicians are quick to celebrate a successful Nigerian who made their mark outside Nigeria...What happened to our hidden talents back home?

If you get money, relocate for good...I hope my tweet is clear."

Another said, "They all lack character. Very bad example for the next generation."

Only two days ago, Nigerian tweeps had taken to their social media handles to call out Nigerian football super star, Mikel Obi, stressing that Kogi State Governor, Bello's administration was not deserving of the accolade the footballer gave him.

They had called him out for pledging support for the political aspirations of the Kogi governor.

Obi had said he was hopeful that Bello and himself could work together as a team to achieve success.

Sowore, also via his Twitter handle on Monday, described Obi as a sycophant.

Sowore wrote, "@mikel_john_obi As ur career in football flames out, another one starts in sycophancy + ass licking! At least for sycophancy, you don’t need any rigorous practice! Enjoy it while it lasts with

@OfficialGYBKogi the most irresponsible and incompetent Nigerian governor below 50."