A man has finally confessed to the police that he killed her husband weeks after lying about her death. 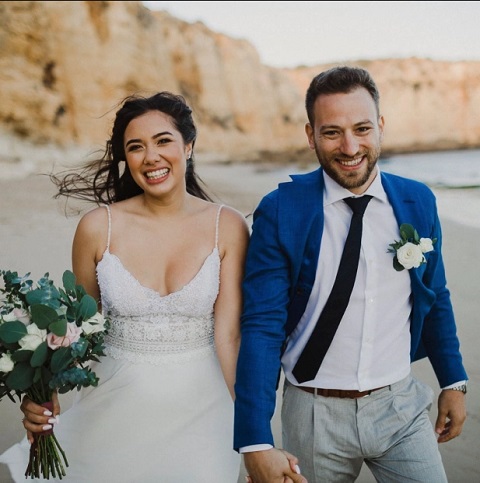 Crouch and Babis Anagnostopoulos
A man who killed his wife and lied that she was strangled to death by criminals who broke into their home has confessed.
The Greek husband of a British woman named Caroline Crouch, 20 confessed to murdering her after she vowed to leave him and take their baby with her, police have confirmed.
Babis Anagnostopoulos, 33, admitted to suffocating her to death after more than eight hours of interrogation in the homicide department of Athens' police headquarters.
Babis, a helicopter pilot, had claimed that Albanian criminals broke into his home on Tuesday, May 11, 2021, blindfolded him, tied him up, then beat his wife and strangled her to death. He added that the killers went off with 15,000 Euros in real money and other valuables (read here).
The home where Caroline was murdered
He even granted interviews, pretending to be a grieving husband for over a month. Even after his wife was buried in May, he continued in the pretense.
At his wife's funeral, Babis looked mournful as he carried their daughter.
In a moving eulogy, an emotional Babis said: "I was very lucky that I knew Caroline and that she loved me. I was very lucky for all the moments we shared.
"One thing that makes me even more sad than her death is the fact that our daughter will grow up without remembering her beautiful mother who was the joy of my life.
"But through her daughter, Caroline will always be with me and with all of us. Our loved ones are the most important people to us all."
Cops spent weeks searching for the non-existent Albanian criminals. But Babis eventually confessed following interrogation.
"The culprit is her 33-year-old husband who has confessed to the act," the authorities said in a statement released at 9.36 PM local time on Thursday, June 17.
Police have described him as a "top class actor" because of the way he staged the elaborate crime scene and continued pretending as the grieving widower for over a month.
Babis even drowned the family dog and hung its body from a stair banister to blame it on the burglars and strengthen his story, investigators said.
According to reports, Babis eventually broke down saying: "That night we had been arguing from early on.
"At some point, she threw the child in her cot and she told me to get up and leave the house.
"She pushed me and punched me. My judgement became blurred, I strangled her and then I staged the robbery."
Police had apparently suspected Babis based on a barrage of new evidence, but, in order for him not to "take fright", they accepted his request to remain on the Greek island of Alonissos - where Caroline was buried in May - so that he could attend a memorial service in her honour on Wednesday, June 16.
Some of the new evidence came from the pilot's own mobile phone, as police revealed an app had tracked his repeated steps from the attic to the basement of the home at the time he had claimed to be blindfolded and tied up by the alleged robbers.
It was discovered the memory card in the security camera of the maisonette the couple shared had also been removed at 1:20am - while he had claimed the thieves broke into the house several hours later.
Also, Caroline's smartwatch recorded that her heart had stopped beating hours before the time Babis claimed she must have been murdered.
Husband of Caroline Crouch confesses to suffocating her weeks after claiming criminals broke into their home and strangled her
"He was a top-class actor...one of the last things he did on Alonissos was to hug Caroline's mother and tell her he was going to Athens to identify a suspect," a cop told the Sun Online.
Babis, who was 12 years older than his student wife, was detained in the cells at Greece's central police headquarters last night.
It had taken police 37 days to crack the case with investigators following up a host of dud inquiry lines based on the testimony Babis had given.
"It is going to be remembered as one of the great crime cases in recent decades," said one source.
Local media reported that among the evidence police had of the altercation was an attempt by Caroline to book herself into a hotel with their baby daughter on the night of the crime.
In a text message found on Caroline's phone, it had become apparent that she had indeed threatened to leave her husband just hours before her own murder.
The pilot will be hauled before the courts today, June 18, but is expected to request a 48-hour reprieve to prepare his defence with lawyers.
Caroline, a student, was just a teenager when she first met Babis, who is 12 years older than her. The couple wedded in May 2018. They share a daughter who was 11 months old at the time of her mother's death.
Top Stories