The murder of Oluseye, an official of the Department of State Services, by some soldiers on Friday, June 4, hit the family like a thunderbolt and shattered dreams. 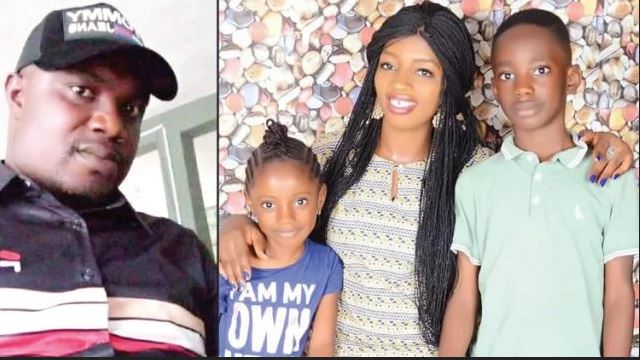 The late Oluseye (left), Wife and kids of the slain DSS officer

According to The PUNCH, sixty-seven-year- old Mr Lawrence Olubodun and his 61- year-old wife, Grace, residing in Ado Ekiti, the Ekiti State capital, have yet to come to terms with the death of their son, 33-year-old Oluseye.

The murder of Oluseye, an official of the Department of State Services, by some soldiers on Friday, June 4, hit the family like a thunderbolt and shattered dreams.

The late Seye’s two children, Kayode, 9, and Anjola, 6, daily ask their heavily pregnant mother, Sade, when their father would return home. Seye’s parents remain inconsolable and his grandfather looks forward to his grandson’s visit oblivious of his demise.

June 4 started on a good note for the late DSS official and he had no premonition of death when he left his elder brother, Tayo, at about 7.30pm after a brief meeting with an agreement to meet the following day. But a few minutes after they departed, he ran into a situation which cost him his life.

Some eyewitnesses, who spoke with our correspondent around the NTA Road in Ado Ekiti where Oluseye was killed, alleged that one of the four soldiers in a hotel along the road stabbed him to death following an argument.

One of the eyewitnesses said, “The soldiers who were inside the hotel stopped a young man they suspected to be a ‘Yahoo boy (internet fraudster)’ and while interrogating him, the young man saw the DSS official on a commercial motorcycle and begged him to rescue him from the soldiers.

“When he got to the soldiers, a hot argument ensued between them and one of the soldiers became so angry that he drew out a knife from his trouser and stabbed the DSS man in the neck. He fell down immediately and started bleeding. Those drinking inside the hotel that saw what happened fled instantly for fear of arrest.’’

Tayo, the slain DSS man’s elder brother, told Sunday PUNCH that he went to the scene of the incident the next day to know what happened.

He said, “The information I gathered was that my late brother was pleading for ‘a brother’ who is a commercial bike rider. They said the bike rider was held by the soldiers and he called my brother when he saw him. My brother I was told pleaded for the bike rider’s release. People around the place further told me that my late brother even showed them his ID card for identification and that he knew the bike rider. That was how an argument started which led to his death. But it is still surprising because I wonder how such an argument between soldiers and a DSS officer over a bike rider could lead to death. I learnt that my brother pleaded that, ‘please don’t kill me, my kids are young, my wife is heavily pregnant.’ Despite that, they still stabbed him in the neck. The situation baffles me. I gathered that those who manhandled him were five; four soldiers with a driver who came with them to the place. I was told that the five of them pounced on him before one of them stabbed him to death.’’

Saying his extended family and Ado community would miss the late DSS officer, he added, “He was useful to the Ado Ekiti community and not only to the family. On Saturday when news of his death spread to Okesa area of Ado Ekiti, where we grew up, traders locked their shops. His death is painful to everybody.”

Oluseye’s elder brother, who could not believe that he was murdered 30 minutes after they departed on that day, said his death was shocking to him.

He added, “I parted with him by past seven and I heard that the incident occurred at 8pm. Our last discussion was that we would see the following day. When I got a call by past 12am on Saturday from our elder brother that Seye was dead, I was mad. How come? Someone I saw at about 7.30pm and we still said ‘see you tomorrow.’ I didn’t believe it until photos were shown to me that he was stabbed and he bled to death. It still amazes me and it is like a dream I like to wake up from.”

Tayo, who described his late younger brother as jovial, accommodating, a giver, easygoing and a dedicated DSS officer, expressed worry over the future of his children’s education.

He said, “That he pleaded with the soldiers not to kill him for the sake of his young children and his pregnant wife showed that he loved, cared and had good plans for his family. He loved his children and never joked with their education.

“His death will affect the children; a boy of nine years and a girl of six years as well as an unborn baby. His wife has not been feeling fine. All we are doing is to encourage her to be strong. She’s heavily pregnant and will put to bed any moment from now. She is shattered. The incident is still like a dream to her.  I reassure my late brother’s children to see me as their daddy and that their father had travelled. I still weep deep down inside me whenever I am at their place because I wonder where I will start from to shoulder their responsibilities because I am struggling to live.’’

He further said his late brother had a housing project still at a foundation level.

“We want justice. All we just want is justice. No lamentation can bring him back to life. But the family wants justice,’’ he stated.

Tayo noted that it had been difficult to console their parents to accept their fate following the brutal murder of his younger brother by the soldiers.

He said, “When information got to my dad that Seye was dead, with tears, he ran to the hospital where he was taken to. He took anointing oil, poured some into his mouth and on where he was stabbed whether a miracle would happen. He cried overnight and the next morning we took him away from home.

“The case of my mum who returned from Lagos on Saturday morning without knowledge that her son was killed the previous night was another thing. She travelled to Lagos two months ago to take care of her last born who was recently delivered of a baby.

“We tried in vain to stop her from returning that Saturday because of the tragedy at home. But she did not agree because she was returning with the joy and desire to be with us. She said she had missed us. When she arrived at about 2pm that Saturday, she was suspicious on seeing mourners at home. She asked what happened and could not control her tears when she was told. We still have grandma and grandpa. Grandpa asks of Seye but we cannot tell him that he is dead. My late brother always visited grandpa who is over 100 years old.’’

Tayo commended the DSS for its efforts since the incident occurred by staying with the family, arresting the culprits, ensuring the conduct of autopsy and obtaining death certificate.

He said, “Immediately the soldiers perpetrated the act, they returned to their barracks in Akure. DSS’s arrest of the man who drove the soldiers to the hotel that day shed light on the whereabouts of the soldiers. We learnt that immediately the DSS called the soldiers’ commander in Ado Ekiti, they contacted their head in Akure. The soldiers were arrested as they got to the Akure barracks. They had hoped to hide under ‘unknown soldiers.’ We have not seen them but that is the information we got.’’

Tayo , however, said that he was unhappy that his slain brother’s corpse is still in the morgue.

“I keep crying every day. I don’t know what is delaying his burial. The cause of his death is known to all. He was stabbed to death by soldiers. It’s an everlasting pain. They should let us lay him to rest. The security agencies are saying that the investigation is ongoing. Whatever they want to do, they should hasten it so that we can lay him to rest and for members of the family to move on with their lives,” he said.

When contacted by Sunday PUNCH, the spokesperson for the police in the state, Sunday Abutu, said the suspects had been arrested and undergoing interrogation before they would be handed over to the police. He said, “We (police) are still waiting for report from both the DSS and the military.”