The embarrassing scene took place yesterday, June 21 at the senator's house in Abuja. 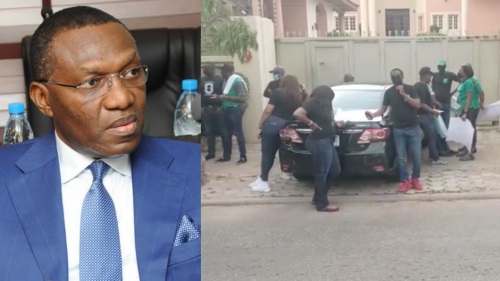 Senator Andy Uba
A Nigerian senator, Andy Uba has been embarrassed after at least 20 staff members of Heritage Bank Plc stormed his house to protest over his refusal to pay up his debt.
The embarrassing scene took place yesterday, June 21 at the Senator's house in Abuja.
Andy Uba is the senator representing Anambra South Senatorial District in the Senate.
In a video shared online, the aggrieved workers who wore branded T-shirts and Jean trousers could be seen gathered in front of Uba's house in protest, with placards in hand.
A voice in the video said they were staff members of Heritage Bank and were at the Senator's house to put pressure on him to pay back his loans after several efforts had failed. They said they felt compelled to take the action because their jobs were at stake, adding that they would likely lose their jobs if the loans were not repaid.
The voice said:
"Good morning, ladies and gentlemen. Today is Monday, the 21st day of June 2021, and we have here the staff members of Heritage Bank Pl, Abuja. We are in front of Senator Andy Uba's house in Abuja.
Senator Uba has been owing the bank for a couple of years now and we are here for a peaceful meeting with him, very peaceful meeting. To ask him to kindly repay those loans because they are depositors' funds.
Those monies, if they are not repaid, will throw the number of the people you see here, with their families out of work ad we know the situation of the economy now. If this number of people are thrown out of work, you know what it means.
So we are here to appeal to the Distinguished Senator to kindly pay this money so that these people will not lose their job..."
The senator is yet to react to this development.
Watch the viral video below