Miyetti Allah has been exposed as the brain behind the violence unleashed by armed herdsmen. 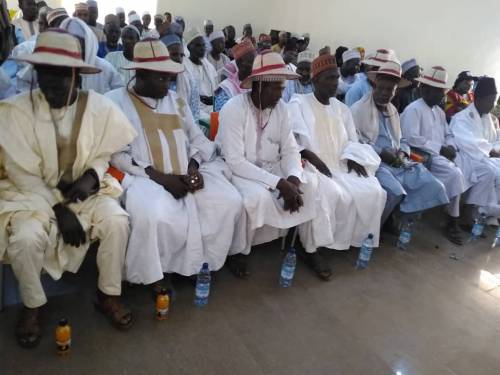 Miyetti Allah members
Miyetti Allah Cattle Breeders Association (MACBAN) has been accused of being behind the bloodshed by killer herdsmen in the Southern part of the country.
The accusation was made by the Northern Cattle Dealers Association of Nigeria.
According to the group, Miyetti Allah is responsible for the widespread violence perpetrated by suspected killer-herdsmen in the South-East and other regions of the country.
The Imo state chapter of the group led by Ibrahim Salihi, made this known while paying a courtesy visit to the Chairman Elders Forum, Ohanaeze Ndigbo Worldwide, Emmanuel Iwuayanwu, in Owerri.
The group alleged that members of the Miyetti Allah always intervened whenever the dangerous group of killer herdsmen was arrested by security operatives either for destroying farmlands or other wicked activities, adding that after some days they would be freed.
However, they called on the Nigerian government as well as state governors to screen the entry of Fulani people from the Central Republic especially those of Lubwa, ethnic group, Vanguard reports.
Salihi noted: “Banditry did not start today, it started during Abacha regime, we have herders who came into Nigeria From Central Africa. There is an ethnic group in the Fulani tribe that are carrying AK 47, and are the most wicked people.
“The Miyetti Allah is not helping matters they are allying with this group, for instance, if your farms are destroyed by this group, the Miyetti Allah is supposed to intervene by asking the herders to pay compensation. But they are supporting this group who are doing this and carrying arms. The Miyetti Allah is encouraging these people to destroy farms.
“For example, you have your farm and I have my own and I destroy your own instead of saying sorry for destroying my farms you say that I will pay you, and if you pay me today and you don’t pay me tomorrow, I will be angry and I will cut your cow and from there the problem starts and they will invite their people from Niger to come and fight for them. Fulani man carrying guns is not a lie even us who are not with them they kill our cows.”
“Another problem is that the Federal Government is not doing enough, as they are not screening these people coming in from Central Africa into Nigeria. The Federal Government should check Fulanis coming into the country ànd even the state governments should do the same.
“Our reason for coming here is to appeal to Chief Iwuanyanwu, to intervene in the insecurity in the land and that our people from the North are calling us to come back to the North and that bandits are killing the northerners in the East.”
In his response, the Chairman Elders Forum of the Ohanaeze Ndigbo Worldwide, Emmanuel Iwuayanwu, said: “You have the right to live in any part of the country. It is also wrong for governments to watch bandits kill and burn police stations and I want to tell you that those who are killing in Igboland are not Igbos.
“They are criminals. Let me also tell you that the situation in Imo state is under control. The governor is doing his best to restore peace which we have seen in the past few weeks. Anytime you receive any threat, report to us.”
Top Stories