Photo Of The 3 People Arrested For Attacking Fulani Herdsmen, Shooting Cows In Oyo


It was gathered that the incident happened in the Eruwa area of the state. 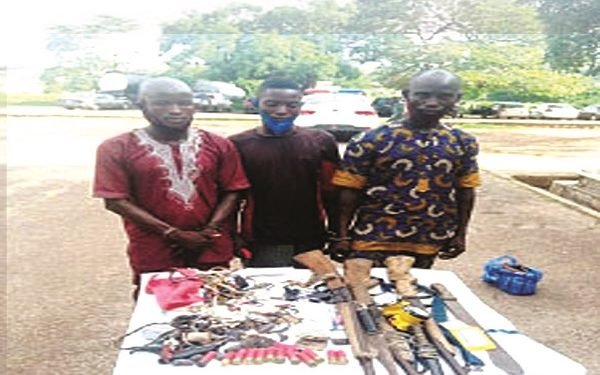 Three men arrested for shooting cows
Three persons have been arrested in Oyo state for allegedly shooting cows belonging to some herdsmen.
It was gathered that the incident happened in the Eruwa area of the state.
Spokesman Adewale Osifeso said the suspects Opeyemi Ajibodu, Segun Dade and Dare Adenle were found in possession of two dane guns, and daggers, among other weapons.
He said the police made the arrests in the Sunbare area following reports of several gunshots reportedly fired in the nearby bush.
He added that an on-the-spot assessment carried out at daybreak revealed that the gunshots were from an attack launched against a group of Fulani herders, which resulted in the killing of six cows and wounding of 13 others.
“In continuity of the crime-fighting crusade of the Oyo State Police Command, on Sunday 20th June, 2021, several gunshots were reportedly fired in a bush at Sunbare Area, along old Ibadan Road Eruwa, causing fear and panic in the hearts of residence.
“Upon receipt of the information, police operatives attached to Eruwa Divisional Police Headquarters gathered momentum and stormed the reported scene.”
Upon arrival at the scene, the three suspects were arretsed with the weapons, police sas and wounding of 13 others.
“Upon interrogation, fact gathered revealed that the attack was perpetrated to ward off the herders from grazing in the forests in Eruwa environs,” Osifeso said.
Top Stories