He said police converted his vehicle to a patrol vehicle after they recovered it from robbers who stole it from him. 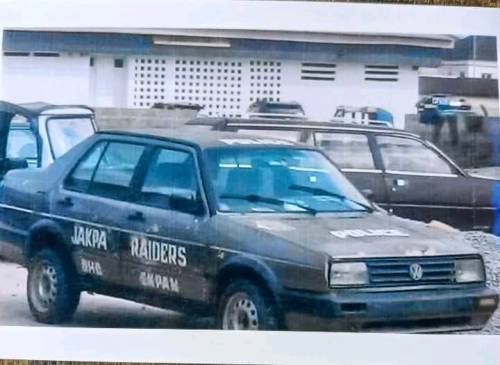 He said police converted his vehicle to a patrol vehicle after they recovered it from robbers who stole it from him.

Oboro, who was using the vehicle for commercial purposes, described the action of the police as oppressive and urged the public to come to his aid.

He said, "Armed robbers stole my car, Volkswagen Jetta in 2015, and I went to report the incident at Ekpan police station as required by law. They collected money from me to send signals and dif some investigation.

"The same station recovered the car in 2016 but refused to call me to come and collect the car. The police removed the number plate, branded the car as 'Jakpa Raiders', and began to use the car as their operational vehicle.

"I was going out one day and I saw my car where police parked it, to do stop and search operation. I approached them and told them that the car is my missing car. They told me to come and meet them at the station. When I got to the station, the police demanded N115,000 to reclaim my car.

"I told them I didn't have that kind of money for my car that had been illegally converted to police property, and I went to court to file the matter."

He said Justice R. D. Harriman of a high court sitting in Warri presided over the matter and ordered the Nigeria Police Force to pay him N10 million as compensation.

"Thereafter, the police appealed at the Appeal Court in Benin. Since when the case started, the police have refused to show up in court till today. And they didn't pay me any money, while my car is still with them.

"I'm using this medium to beg Nigerians to prevail on the Nigeria police to obey the court judgment and give me my car or continue the appeal the case they instituted in the Appeal Court, Benin," he added.