The young woman has become the first black to be elected as Mayor of Longford County Council. 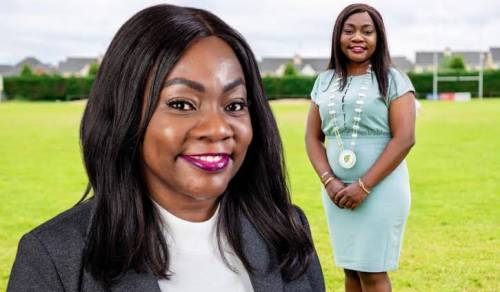 Uruemu
A Nigerian woman, Uruemu Adejinmi has made the country proud in faraway Ireland.
The young woman has become the first black to be elected as Mayor of Longford County Council.
She is the first migrant, first African and first black female to become Mayor.
Ms Adejinmi's election as Cathaoirleach of Longford Municipal District also makes her the country's first female African Mayor.
Her journey into politics began in 2016 when she supported a candidate in a local election. Shortly afterwards, her neighbour asked her to join Fianna Fáil.
"At that stage, I became very active. I was going to meetings and fundraisers, travelling to Dublin for the convention and getting involved in every way possible," she said.
In 2018, she undertook an internship with the Immigrant Council of Ireland, shadowing Joe Flaherty while he was a local councillor. In 2020, Mr Flaherty became a T.D. and Ms Adejinmi was co-opted to his seat.
Ms Adejinmi said she was "deeply honoured" to take over as Mayor this year following a unanimous election.
"There's a huge silo in getting information across to diverse community groups, so it's been amazing having that link to council offices to share information to migrants to help them to get access to services and support," she told The Irish Times.
There are barriers to migrants becoming involved in politics, particularly in more rural areas, Ms Adejinmi said. The main obstacle has been getting more migrants onto the electoral register.
"I speak from a Nigerian perspective and one big issue in that regard is there isn't a great trust with the police force. People are reluctant or not willing to engage with the police unless they have to because of experiences back home."
That cultural attitude "takes time for people to get around", she said.
Political parties should "engage more actively" with migrants, as most don't see it as an area open for them to become involved in, she said.
"There is no shortage of talent in the migrant community but there is a shortage of community leaders from migrant backgrounds."
"If it weren't for my neighbour asking me to join his party, I wouldn't have considered politics," she said. Getting to work, integrating into the community and nurturing her children were Ms Adejinmi's priorities until she was directly approached about getting involved.
She said her key priorities are jobs and housing.
"I am hoping to lobby for an influx of industry. Hopefully, businesses will take a look at starting in Longford and that would help a lot of people who are leaving or commuting because of the lack of jobs."
Top Stories