The apex Igbo socio-cultural organisation while disowning the statement, said the group is yet to make known its position. 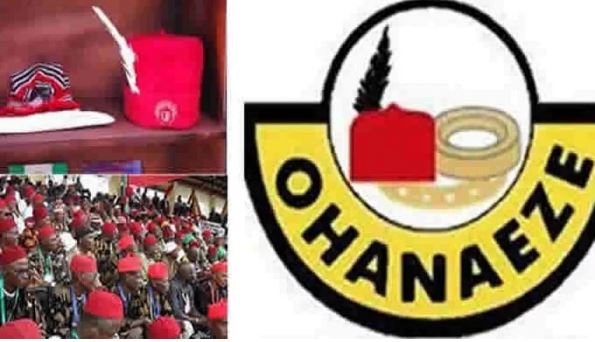 Ohanaeze
Ohanaeze Ndigbo Worldwide has said a statement purportedly attributed to the organisation hailing the arrest of Indigenous People Biafra, Nnamdi Kanu by the federal government is fake.
The apex Igbo socio-cultural organisation while disowning the statement, said the group is yet to make known its position.
Chief Alex Ogbonnia, the National Publicity Secretary of Ohanaeze made this known to news men.
He described those behind the fake statement as mischief makers, impostors and charlatans.
“The attention of Ohanaeze Ndigbo Worldwide has been drawn to a publication currently circulating in the media suggesting that Ohanaeze has issued a statement regarding the alleged re-arrest and re-arraignment of Mazi Nnamdi Kanu.
“Ordinarily, we would have ignored the said press release, but silence in this circumstance would mean giving validity to such fallacy by the unsuspecting public.
“Ohanaeze Ndigbo led by Ambassador Professor George Obiozor has not issued any press statement on the matter.
“Ohanaeze Ndigbo as the apex Igbo cultural organisation does not issue public statements in a hurry,’’ he said.
The Ohanaeze spokesman noted that in the event of further breach of this warning, “Ohanaeze Ndigbo will be compelled to invoke the full weight of the law to deal with the offenders’’.
The group which issued the disclaimed statement also styles itself as Ohanaeze Ndigbo Worldwide.
It said Kanu’s arrest will avert another civil war and bring peace to the south-east.
Its secretary, Okechukwu Isiguzoro, said the development will bring violent agitations in the south-east to an end.
He said Kanu’s refusal to listen to Igbo leaders’ advice led him to his present predicament.
The group advised the federal government to handle the IPOB leader’s case carefully in order to prevent violent revolts from his followers.
“The re-arrest of Nnamdi Kanu the leader of IPOB is the beginning of the end of violent agitations in southeastern Nigeria and a lesson to others that, deviation from the nonviolent agitations and wasting of the innocent blood of the Igbo youths contradicted what Igbos are known for, and self-determination should not be used for purposes of fortune and fame-seeking.”
“Nnamdi Kanu’s refusal to adhere to the advice of Igbo leaders, Elders, and Political leaders is the outcome of what had befallen him. He made a lot of enemies especially those that would have saved him and Federal Government will never lose grip on him again.
“We don’t think that any Igbo leader will stick out his/her neck for him, his re-arrest will eventually bring peace and stability to the region and averted another civil war that was raging on”.
Top Stories