Ezeife while slammed President Muhammadu Buhari for displaying nepotism which is the cause of the rising agitations for secession. 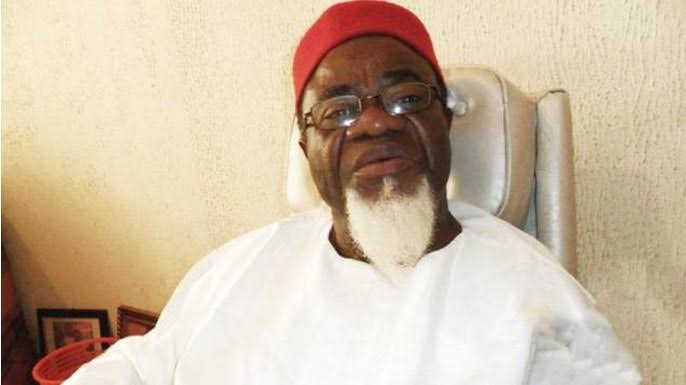 Ezeife
The federal government has been warned that it is pushing people of the South-East out of Nigeria.
A former Anambra state governor, Chief Chukwuemeka Ezeife said this while slamming President Muhammadu Buhari for displaying nepotism which is the cause of the rising agitations for secession.
According to DailyPost, Ezeife advised the Federal Government to be cautious in handling the treason case preferred against Mazi Nnamdi Kanu, the leader of the Indigenous People of Biafra (IPOB), tasking the government to go strictly by the laws of the land in her continuation of the trial of the secessionist leader.
“Let me advise the federal government, they must be careful in dealing with this case. The detention and actions of the federal government against the southeast has raised Nnamdi Kanu’s prestige and reputation,” he said.
“Nnamdi Kanu is now seen as the authentic leader of the southeast. If you conduct a referendum today, eighty percent of people will be voting for biafra. Federal government needs to be careful and go strictly by the law. Government has been pushing southeast out of Nigeria, and the young men are reacting to it”.
The elder statesman maintained that restructuring of Nigeria remains the panacea to the gale of secessionist agitations currently playing out in many parts of the country, as well as the economic downturn and infrastructure decadence adorned.
DAILY POST recalls that the Federal Government had on Tuesday disclosed that it has rearrested the self-acclaimed Biafran leader.
The Attorney-General of the Federation and Minister of Justice, Abubakar Malami, SAN who confirmed the development, said he was arrested by a combined team of Nigerian and foreign security agents in a coordinated interception.
Against this backdrop, he was dragged before Justice Binta Nyako of an Abuja Federal High Court for the continuation of his trial.
Justice Nyako, after listening to Kanu and the government, remanded him in the custody of the Department of State Services, DSS.
Nnamdi Kanu had a few years ago jumped bail and escaped out of the court.
In the same vein, the former Anambra Governor, Chukwuemeka Ezeife has dissociated himself from the online news report linking him and Ohanaeze Ndigbo with the repatriation and subsequent re-arraignment of the IPOB leader.
He alleged that some disgruntled individuals had embarked on a destructive mission to tarnish his image over his steady criticisms against the Nigerian government’s ill-treatment to the southeast of Igbo extraction.
His words, “I do not think Ohanaeze had anything in getting Nnamdi Kanu arrested. Of course, there had been manufactured stories putting my name as leader of a group of Ohanaeze members that lured Nnamdi Kanu to arrest. Infact, it is surprising that such a thing can come out.
“The reports they are giving about the arrest, nobody is sure where the arrest was done. Is it in London, Ethiopia, Kenya etc, all these have been mentioned, where the arrest was done. Remember that, to lure anybody to a place, you have to be there. I have not left Nigeria this year. It is rarely criminal to allege that Ohanaeze lured Nnamdi Kanu to where he was arrested.
“I think there is a group that is trying to tarnish my image, because I have seen many things in WhatsApp that bore my name when I don’t know anything about the post. It has been so frequent in the last few days, and I began to wonder, as to the conspiracy by some groups against me”.
Meanwhile, the Kenyan Government has dismissed claims that it was involved in the arrest and extradition of Nnamdi Kanu to Nigeria.
Kenyan authorities said they could not ascertain whether the arrest of Nnamdi Kanu took place in the East African nation.
The Director-General of Kenyan Immigration Services, Alexander Muteshi, dismissed the claims of his country’s complicity, arguing that it was not possible to tell whether the separatist leader had entered Kenyan territory.
“I can’t know that,” Mr Muteshi told Kenyan Newspaper, Nation, when asked whether the claims made by the family were true.
“I am not in the picture of his presence in the country. I am only able to tell if somebody entered the country legally,” he added, leaving room for speculation as to whether Kanu had sneaked into Kenya through either illegal routes or under a false name.
Spokesperson for the Kenyan Government, Cyrus Oguna refused to discuss the matter, according to the newspaper.
As DAILY POST reported earlier, Nnamdi Kanu’s family and IPOB had accused the Kenyan government of having committed the most serious violation of international law.
Top Stories