The team was made up of a total of 10 pirates, including two Togolese and one Ghanaian. 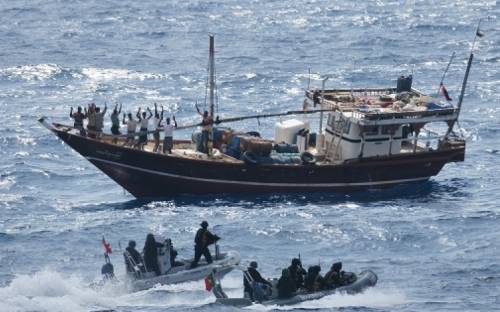 According to SaharaReporters, as many as seven Nigerians, who were part of a team that attempted to hijack a ship in Togolese waters in May 2019, have been sentenced to long prison terms during a trial at a Lome court.

The team was made up of a total of 10 pirates, including two Togolese and one Ghanaian.

They were on trial for “maritime piracy, wilful violence and groups of criminals”.

Nine of them have been sentenced to prison terms ranging from 12 to 20 years during a trial at the court.

One Togolese national was acquitted while the other eight pirates were given sentences from 12 to 15 years.

The Ghanian, who is on the run and facing an international arrest warrant, was sentenced on Monday night to 20 years in prison.

The group were accused of attacking the tanker G-DONA 1 during the night of May 11, 2019, Guardian reports

During the trial, the prosecutor Kodjo Gnambi Garba was quoted as saying, “People should understand that piracy and armed robbery at sea will be punished. And for these sea offences, we will be uncompromising.”

It was the first time pirates have been tried in Togo, one of the West African countries with a coastline on the Gulf of Guinea, a major trading route that now accounts for most of the world’s abductions of the commercial crew by pirates.

Pirate attacks in the Gulf are mainly carried out by gangs from Nigeria who speed out in boats to raid commercial vessels offshore to kidnap the crew for ransom.

According to a recent report by the International Maritime Bureau, the Gulf of Guinea, which stretches along 5,700 kilometres (3,500 miles) of coastline, accounted for 130 of the 135 kidnappings of seafarers recorded worldwide last year.

A group of shippers and trade companies in the international maritime sector in May signed a declaration calling for the creation of a coalition to put an end to piracy in the Gulf of Guinea.