The young man, who spoke with SaharaReporters said he was arrested on July 14 on Iyalla Street in Mushin, close to Odu Abore Memorial School at 9 pm while on his way home from work. 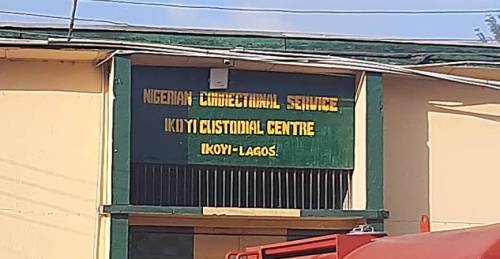 According to SaharaReporters, a young man illegally arrested and transferred to the Ikoyi Correctional Center in Lagos has shared his one-week long experience in prison.

The young man, who spoke with SaharaReporters said he was arrested on July 14 on Iyalla Street in Mushin, close to Odu Abore Memorial School at 9 pm while on his way home from work.

According to him, the police took him to Olosan Police Station, also in Mushin on allegations of being a cult member and collected his phone from him, making it difficult for him to contact his family members.

He noted that the following day which was Thursday, 15 July, he, alongside some others in the cell, were taken to the State Criminal Investigation and Intelligence Department (SCIID), Panti, Yaba.

The young man said he was charged to court from Panti and pleaded not guilty to the charges because, according to him, he had done nothing wrong.

He was, however, released on Thursday 22 July after his family paid a sum of N90, 000 to the police and others.

He said, “I was on my way back from work last Wednesday along Iyalla street when some police officers arrested me though I had done nothing wrong. It was even around 9 pm, not like it was very late.

“They collected my phone from me, they said I am a cultist though I don't know what they saw that made them say I am a cultist. That night, I slept in the cell and they didn't give me my phone to call my family. No one knew where I had gone to.

“The following day, I was taken to Panti and from there they said we would be going to court and I was like, court for what? They charged us to court for disturbing public peace. I pleaded not guilty, but I was still taken to Ikoyi Prison with the others who pleaded guilty.

“I was there for a few days; then on Thursday, July 15, some people came to the prison, they took our biometrics, then allowed us to call out family. I placed a call across, my family came and they paid N40, 000 to the lawyer, N30, 000 to the prosecutor, N8, 000 to the warder. We were told that the surety documents were not complete so we paid N5, 000. Before the Chief Magistrate could sign, we also paid N7, 000 and that was when I was finally released.

"I was beaten and tortured by police on the day I was arrested, and in prison, over 100 of us slept in a cell. We were given poor food, and on."