The victims were abducted on Damaturu/Maiduguri highway on Saturday by terrorists. 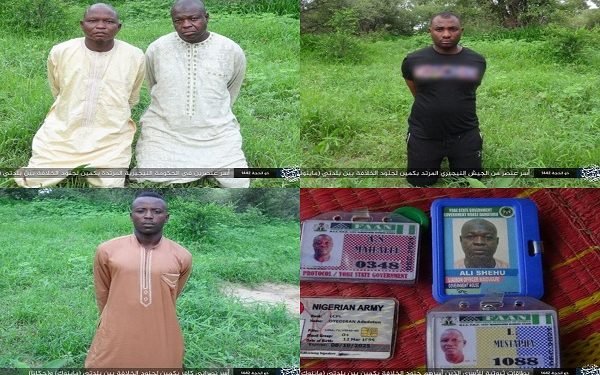 The abducted soldiers and others
Photos of soldiers and Yobe Liaison officer abducted by Boko Haram/ISWAP terrorists have released by the group.
The victims were abducted on Damaturu/Maiduguri highway on Saturday.
The insurgents also released the identity cards of their abductees.
In the display of the ID cards, two of the cards belong to Mai Lalle, one for Mustapha while the other belongs to Lpcl Oyediran Adedotun of the Nigeria Army.
The ID card of the fourth abductee was not sighted from the list of the cards provided by the insurgents.
The Nation reports all the four victims were abducted on Saturday along Maiduguri/Damaturu highway.
While Mai Lalle and Mustapaha were travelling to Maiduguri, the two Army personnel were however traveling to Kano on a pass permit.
The Nation gathered though the pictures of the victims have been released, no contact has been made with the families.
Top Stories