The reporter, who was in court to cover the proceedings of the trial of the activists, was harassed and had his mobile phone seized by the gun-wielding officers who were stationed within the premises. 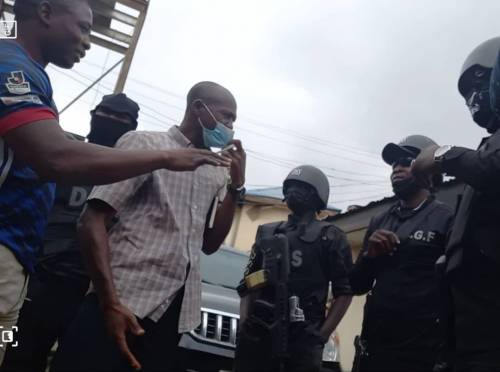 According to SaharaReporters, the operatives of the Department of State Services on Wednesday at Mpape Magistrate Court, Abuja, harassed a journalist with online medium, Premium Times, Ameh Ekwonyilo, for taking the pictures of five activists arrested at the Dunamis International Gospel Centre for wearing T-Shirts with the inscription #BuhariMustGo.

The reporter, who was in court to cover the proceedings of the trial of the activists, was harassed and had his mobile phone seized by the gun-wielding officers who were stationed within the premises.

Trouble started when the journalist made attempt to take the pictures of the activists shortly after they had been granted bail by the court.

One of the hooded DSS officers drafted to the court quickly dragged him and snatched his mobile phone.

A heated altercation ensued as the officers pounced on him and threatened to arrest him while the leader of the team deleted all the pictures in the phone.

The journalist maintained that he had not committed any offence by taking the pictures of the defendants on the premises of the court, adding that he had no obligation to take permission from the officers before carrying out his constitutional duty as a journalist.

It took the intervention of the lawyer of the activists who appealed to the officers to release the phone to the journalist.

SaharaReporters had reported how the activists were charged on five counts bordering on criminal conspiracy with intent to cause a breach of the peace and disturb the public peace, an offence contrary to Section 114 of the Penal Code Law CAP 89 LFN 1990 and punishable under the same law.

They were denied access to their families and lawyers.

The Chief Magistrate, Mohammed Zubairu, had admitted the activists to bail of N500,000 with one surety in like sum who must submit his/her National Identity Card to the court.