One of the victims was said to be a motorcyclist using the road at Oke-Onitea area while another unidentified man was swept away. 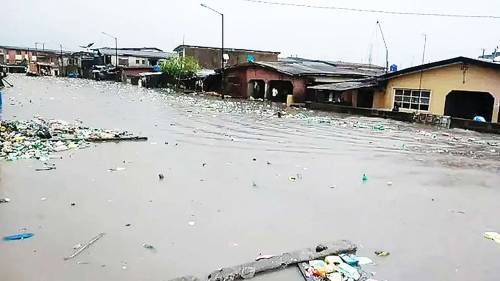 No less than three persons have been reported dead as flood ravaged Osogbo town, the Osun State capital after a heavy downpour on Tuesday night.

SaharaReporters reports that the deceased were at Oke-Onitea and Okejetu areas and drowned while attempting to pass through the flood.

One of the victims was said to be a motorcyclist using the road at Oke-Onitea area while another unidentified man was swept away.

Another house owner died in the flood at Awesin, a resident, Olawuyi Adeleke, confirmed.

It was learnt that about 25 meters of the perimeter fence of the Osun Government House also collapsed.

Vehicular movements were diverted from Lamco junction and Oke-Fai en route the Government House so a temporary perimeter fence can be constructed. While the rail track at Powerline was endangered as flood eroded all the sand beneath the tracks away, suspending only the iron on air.

The corpses, he said, were recovered on the spot.

The Commissioner for Information and Civic Orientation, Mrs. Funke Egbemonde said government has activated its emergency response system, comprising stakeholders in disaster management, including environmental management officers, health workers, and security agencies to respond efficiently to the incident where necessary.