Nigerians have been warned to ignore the APC and the PDP ahead of the 2023 election because they have failed. 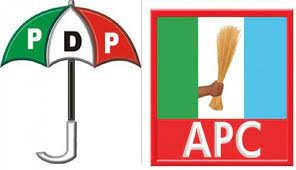 Two most popular parties in Nigeria, the All Progressives Congress and the Peoples Democratic Party have been slammed by the Conference of Nigeria Political Parties (CNPP).
According to CNPP, the two parties have failed Nigerians.
CNPP said this ahead of the 2023 election.
A statement on Thursday by the CNPP Secretary-General, Chief Willy Ezugwu, noted that “unless a virile opposition party evolves ahead of the 2023 general elections, the country will have to return to a one-party system, which is very unhealthy for our democracy.
“Evidently, we are gradually returning to the dark days of one party state before the All Progressives Congress (APC) and their allies metamorphosed into a strong opposition party and gave Nigerians an alternative party platform in 2015.”
According to the statement, “The APC has been in power for six years but the lives of the ordinary person are not getting better, increasing the yearning for a new strong opposition party as possible choice against the ruling APC and the PDP.
“Rule of law has become a big challenge as the APC government has jettisoned that basic ingredient of democracy and have continued to manipulate democratic processes and have refused to obey several court orders in the last six years.
“So many valid court judgments have been disregarded by the APC with instances of the party’s failure to abide by its own party constitution in many instances till the recent Supreme Court verdict on its National Chairmanship position.”
“We, therefore, call on all opposition parties in the country to come together and form alliances or mergers to provide an alternative political party platform as both PDP and the APC have failed the masses of Nigeria as main opposition party and ruling party controlling both the executive and the legislature,” CNPP added.
Top Stories