The government of Indonesia has officially tendered an apology after realizing that the assaulted Nigerian is a diplomat. 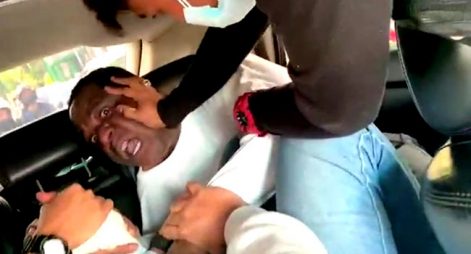 Ibrahim being assaulted by Indenosian officials
A video has surfaced showing the moment Indonesian immigration officials nearly strangled a Nigerian diplomat while 'illegally' arresting him.
The government of Indonesia has officially tendered an apology after realizing that the assaulted Nigerian is a diplomat.
The victim, identified as Ibrahim, a consulate official, was arrested and attacked by immigration officials when he went to a super market.
He was said not to have his passport on him.
The viral video of the assault made the Foreign Ministry angry.
But in a statement on Monday, the ministry said Indonesia has apologised and also apologised to the victim.
“The unfortunate incident is against international law and the Vienna Conventions governing Diplomatic and Consular Relations between states,” the Nigerian Foreign Affairs Ministry said in a statement on Monday.
“The Nigerian Government has complained strongly to the Government of Indonesia, and the Ambassador of Indonesia to Nigeria was summoned by the Honourable Minister of Foreign Affairs.
“The Ambassador explained what he understood happened and apologised unreservedly on behalf of the Government of Indonesia. The Nigerian Government has sent an official protest to the Government of Indonesia.”
“The Ambassador of Nigeria to Indonesia has confirmed that the immigration official involved had since come to the Nigerian Embassy to apologise to the Ambassador and the diplomat concerned,” the Foreign Ministry said.
Watch the sad video: https://www.facebook.com/watch/?v=529135815024198
Top Stories