The defendants conspired and defrauded Molten Oil and Gas Nigeria limited through a phoney contract financing agreement to supply two trucks of 40,000 litres of diesel each, to Ilorin and Kano Airports for the Federal Airport Authority of Nigeria. 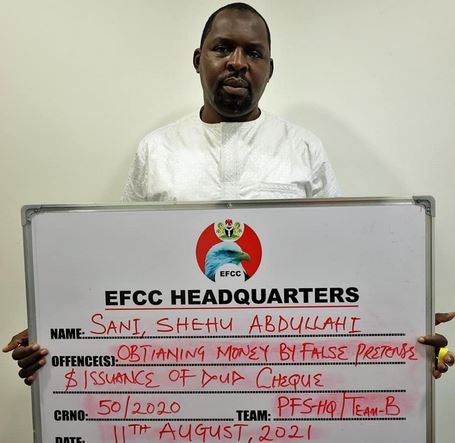 The defendants, sometime in February 2020 in Abuja, conspired and defrauded Molten Oil and Gas Nigeria limited through a phoney contract financing agreement to supply two trucks of 40,000 litres of diesel each, to Ilorin and Kano Airports for the Federal Airport Authority of Nigeria. (FAAN).

After the products were supplied the defendants raised a cheque In favour of Molten Oil and Gas Nigeria Limited which was returned unpaid due to insufficient funds in the account.

One of the charges read;

“That you Sani Shehu Abdullahi being a Managing Director of First Class General Business & Investment Limited, First Class General Business & Investment Ltd, and Abubakar Mohammed (still at large) sometime in March, 2021, within the jurisdiction of this Honourable Court with the knowledge that there was insufficient funds in the account of First Class General Business and Investment Ltd with Zenith Bank Plc issued to Molten Oil and Gas Nigeria Ltd, cheque No. 58336919 dated 9th March, 2020 for the sum of Thirty Four Million, Eight Hundred and Twenty Four Thousand Naira (N34,824,000) which said cheque when presented for payment within (3) three months of issue was dishonoured due to insufficient funds standing to the credit of the account to cover the face value of the cheque and thereby committed an offence contrary to section 1(1) (a) of the Dishonoured Cheque (Offences) Act Cap 102 Laws of the Federation of Nigeria and Punishable under Section 1 (1) (b ) (i) (ii) of the same Act, 2007”.

Abdullahi pleaded not guilty to the charges when they were read to him.

In view of his plea, the prosecution counsel, Olanrewaju Adeola asked the court for a date and requested that the defendant be remanded at a Correctional Centre.

However, counsel to the defendants, Ohene Chris applied for the defendant to continue enjoying the administrative bail earlier granted to him by the EFCC. But the prosecution counsel opposed the application, urging the judge to remand him in prison.

Justice Oriji, a vocational judge, remanded the defendant at Kuje Custodial Centre, even as he indicated that he will forward the case file to the Chief Judge of the FCT High Court for reassignment.

However, he further ruled that the defendant can file his bail application to him or any other vocation judge, pending reassignment of the case.