The girl was detained by the management of the hospital over the inability of her parents to pay the outstanding medical bill. 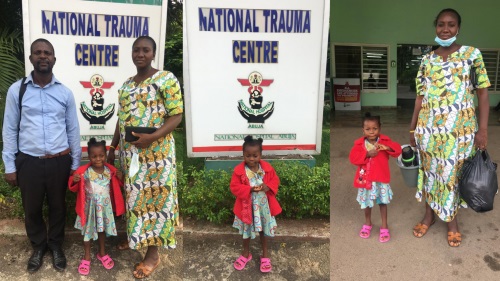 Aleburu finally released
A four-year-old girl detained by the management of the National Hospital Abuja has regained freedom.
The girl Success Isiah Aleburu was detained by the management of the hospital over the inability of her parents to pay the outstanding medical bill.
Success was released on Sunday alongside her mother around 4:00pm after they were told that the hospital management had offset half of the medical bill and that she was free to go home.
Meanwhile, the parents were asked to sign an undertaking, pledging to pay the balance whenever they have it.
SaharaReporters had reported how Success was admitted to the hospital on July 2, 2021 following second degree burns she suffered on her body when her brother mistakenly pushed her towards a charcoal stove on which was a pot of hot water.
The accident occurred on Wednesday, June 30, 2021 at the Sabongari area of Bwari Area Council in the Federal Capital Territory.
She was rushed to the Bwari General Hospital but the health workers on duty told the parents they could not handle her condition, so she was referred to Wuse General Hospital.
She was also rejected at Wuse General Hospital due to the severity of her injury.
Success was thereafter admitted to the emergency ward of National Hospital for treatment and taken to the Intensive Care Unit. On August 5, she had skin grafting to remove some bad tissues.
Skin grafting is a surgical procedure that involves the removal of skin from one area of the body and moving it to a different part of the body.
The surgery was carried out to enable her to walk and it was successful.
The parents of the girl were able to pay the sum of N37,000 out of N312,000 medical bill, leaving them with the burden of paying N275,000 balance, which they could not afford.
Following the failure of the parents to offset the bill, the hospital authority detained the little girl and her mother, Grace Isiah at the female and children ward on the third floor of the Trauma Centre in the hospital.
They were not allowed to leave the ward as hospital security guards and nurses diligently monitored their every move to ensure they did not escape.
Speaking to SaharaReporters on Sunday evening, Isaiah Aleburu, father of Success, expressed appreciation to Nigerians for their support and financial donations towards their plight.
Top Stories