It is unclear if the terrorists were of Boko Haram or Islamic State’s West Africa Province (ISWAP). 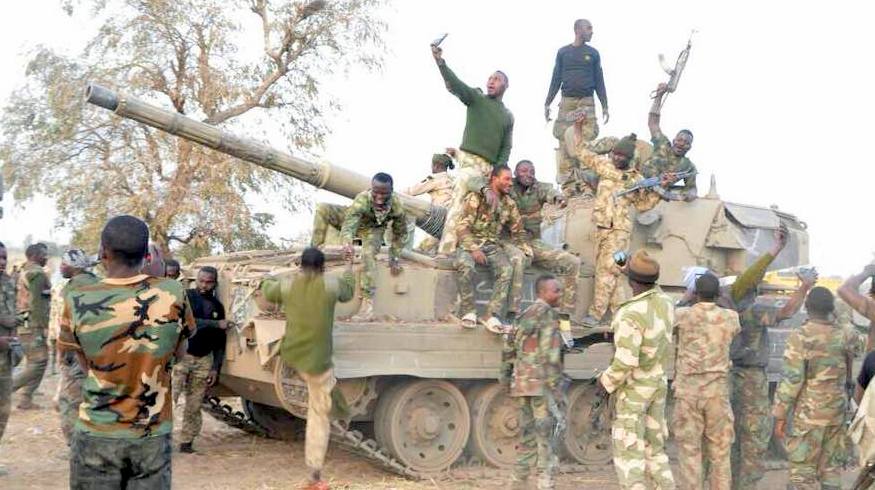 Terrorists on a looting spree in Yobe state have been confronted by Nigerian troops.
The shocking incident happened in Babangida village in Tarmuwa Local Government Area of Yobe State.
The insurgents invaded the community Wednesday evening, ransacked provision stores, stole food items and medicines before fleeing as troops advanced.
“We recovered their truck, abandoned weapons, ammunition, and some of the looted items,” a military intelligence officer told PRNigeria.
“They deliberately mined their escape routes with IEDs to deny the troops of pursuit,” he added.
It is unclear if the terrorists were of Boko Haram or Islamic State’s West Africa Province (ISWAP).
Brigadier General Onyema Nwachukwu, Director of Army Public Relations confirmed the operation in a statement.
The spokesman said troops of Sector 2 Joint Task Force under North-East Op HADIN KAI foiled the attack.
“One gun truck, one Dushka anti-aircraft gun, two AK 47 rifles and unprimed Improvised Explosive Devices (IEDs) were captured”, Nwachukwu noted.
Chief of Army Staff, Lt. Gen Faruk Yahaya has hailed the officers and men for their vigilance and swiftness in countering the assailants.
Top Stories