The farmer noted that his dream to acquire basic education was shattered by the civil war. 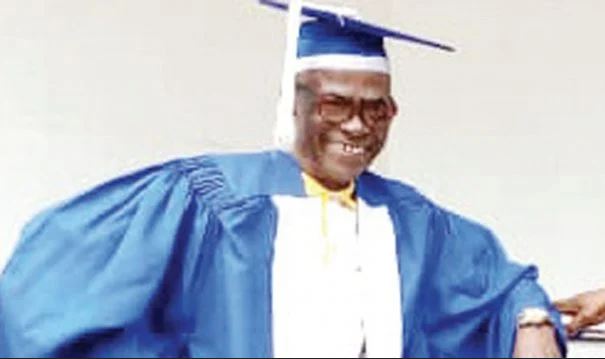 Joseph Ugbene, a 65-year-old man who is a native of Egede, in the Udi council area of Enugu State, has said he returned to school to acquire secondary education because his children laughed at him when he spoke English and mixed up his tenses, according to The PUNCH.

Ugbene, who said he dropped out of school after the Nigeria-Biafra Civil War that ended in 1970, stated this during the graduation of the Adult Education Programme, Egede, which marked the completion of his Junior Secondary School education on Sunday.

The farmer noted that his dream to acquire basic education was shattered by the civil war.

He said, “I was in class one in secondary school when the civil war broke out and after the war, things changed. I had no means of going back to school because my father died.

“So, that was why I said I needed adult education to complete my secondary education and continue. I am now a father of seven children and I trained all of them. They are all educated.

“You see, before I started this adult education programme, when I spoke English my children would laugh because of my tenses. That also motivated me to go back to school.

“So, I must climb that level and I am determined to acquire that education. It is helping me a lot now because I can buy drugs and administer to birds, courtesy of what I learnt in school.”

The Proprietor and Executive Director, Better Life for Rural Dwellers, Mrs Bibian Agada, commended Ugbene and eight other graduates for their desire to learn.

Agada disclosed that the adult education was set up in 2018 in response to the high level of illiteracy she observed among the people in Egede.

She said, “I wanted those who dropped out of school to complete their education free of charge.

“To achieve that, I bought all the recommended textbooks, exercise books and everything needed by the students and teachers, down to erasers and sharpeners. The initial response was great. Seventy-seven adults signed up for the programme.

“Some who thought that they would be paid to go to school were the first to drop out when all they got were books and materials for their study.

“Others dropped out because they were distracted at Ama-Ukwu on their way to school, which is why we are seeking accommodation away from the market square.

“Another set that dropped out were those who could not sustain the rigour of going to school while providing for their respective families. A lot of the younger ones who did not respond to the programme questioned the need for education when they could not get jobs with it.”

She appealed to residents who were not educated to take advantage of the programme and learn for free.