The victims were among the 12 passengers attacked on Wednesday by bandits at the bad portion of the Ifira Akoko -Ido Ani Expressway. 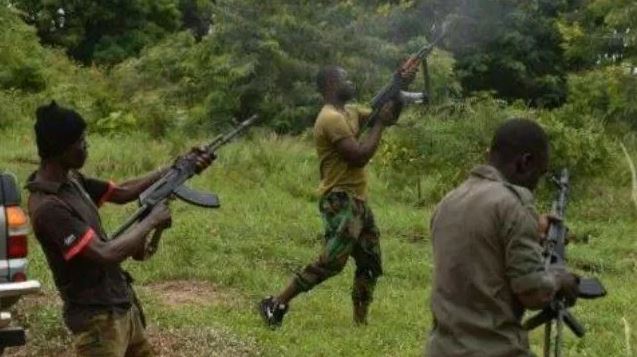 According to a report by The PUNCH, the three kidnap victims rescued by the men of the Ondo State Security Network Agency,  also known as Amotekun Corps, have blamed the driver of their bus for making it easy for the abductors to kidnap them.

The victims , who were among the 12 passengers attacked on Wednesday by bandits at the bad portion of the Ifira Akoko -Ido Ani Expressway were kidnapped and taken into the bush while the remaining nine passengers were rescued by the Amotekun Corps on Friday.

The three victims identified as Benjamin Ojoga, Omolara Fajana and Faith Sunday who were reunited with their families at the Amotekun’s headquarters in Alagbaka, Akure, the state capital, on Saturday said the bus driver abandoned them and zoomed off after the kidnappers started shooting into the air.

One of the rescued victims, Benjamin Ojoga, narrated that the gunmen struck when the passengers alighted from the bus to enable it move freely at a bad portion of the road in Ifira-Akoko, stating that the decision of the driver made it easy for the kidnappers to abduct them as they were not familiar with the terrain of the area.

He said, “It was after the gunshots that the driver of the bus zoomed off which gave the kidnappers the opportunity to abduct us. I got injured from the beating the kidnappers gave me. They were saying that I’m a ‘force man’ and I told them I’m not. But they didn’t believe me.

Narrating her experience at the kidnappers’ den another victim, Omolara Fajana, stated that the driver asked them to alight from the bus to enable it move smoothly on a bad portion of the road.

She said, “On that day, we were coming from Abuja and heading for Lagos. Shortly after leaving Ibilo, our bus got stuck on a bad portion. After spending about three to four hours getting the bus out, we continued the journey.

“On getting to Ifira-Akoko, we saw another bad portion and the driver told us to alight so that the bus would be lighter and to enable it to move easily. Immediately we alighted from the bus, we heard gunshots and everybody became jittery. At that moment, the bus zoomed off and the gunmen were able to abduct four of us. One of us, an old woman limping, was allowed to go but they collected her phone.

“The incident happened around 6:30 pm. Then, they made us walk for about three hours inside the bush. The kidnappers spoke pidgin English and they appeared to be herdsmen.“

Speaking about the rescue operation, the Amotekun Commander in the state, Chief Adetunji Adeleye, said the corps had been making efforts to apprehend the suspects

Adeleye stated, “After we secured the release of the first nine, my men continued to comb the forest which is massive. It is the same forest that extends to some parts of Kogi State. We started tracking them and once they started maintaining contact with the victim’s families, we also commenced tracking up to the point we gave them a hot chase and we were able to secure the victims’ release. “

The commander, however, noted that no arrest had been made, stating that it was working on the case alongside the police and the Department of State Services.

“It is a synergy of all security agencies, we are just taking the lead,” the Amotekun boss noted.